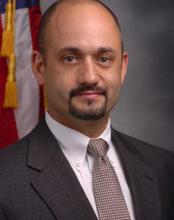 Mr. Morris joined the FBI in 1988 as an administrative file clerk in the Honolulu Division. He completed special agent training at the FBI Academy in 1991 and was assigned to the El Paso Division, where he investigated white-collar crimes, violent crimes, and drug cases. In 1996, he supervised the initiation and implementation of the division’s Criminal Intelligence Squad.

He was promoted in 1997 to supervisory special agent in the Criminal Investigative Division at FBI Headquarters in Washington, D.C. While there, he oversaw the FBI’s Domestic and International Criminal Informant Programs in support of violent crimes, drug trafficking, white-collar crime, and terrorism. In 1999, he was selected to be supervisory senior resident agent for the Cincinnati Division’s Dayton Resident Agency.

In 2003, he was promoted to assistant special agent in charge in the Houston Division to manage the White-Collar Crime and Civil Rights Programs. He also directed the administrative and investigative operations conducted by the division’s six resident agencies.

Mr. Morris was promoted in 2005 to chief of the Programs Support Section in the CJIS Division. Additionally, he served as program manager for the FBI’s development of the Law Enforcement National Data Exchange Program.

In 2006, he returned to FBI Headquarters and was appointed chief of the Strategic Information and Operations Center. In this position, he managed the FBI’s 24-hour global command center for strategic information and crisis management. He returned to the CJIS Division in March 2008 as deputy assistant director.

Mr. Morris is a South Carolina native and graduated from Hawaii Pacific University.