Michael J. Astrue was sworn in as Commissioner of Social Security on February 12, 2007 for a six-year term that expires on January 19, 2013.  The Social Security Administration is an independent federal agency headquartered in suburban Baltimore with over 65,000 employees nationwide.  Commissioner Astrue reports directly to President Obama. 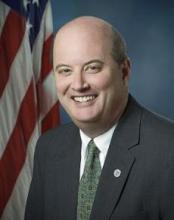 Michael J. Astrue was sworn in as Commissioner of Social Security on February 12, 2007 for a six-year term that expires on January 19, 2013.  The Social Security Administration is an independent federal agency headquartered in suburban Baltimore with over 65,000 employees nationwide.  Commissioner Astrue reports directly to President Obama.

Commissioner Astrue is an honors graduate of Yale University and Harvard Law School.  Early in his career, he worked for Senator Richard Schweiker of Pennsylvania and evaluated federal demonstration projects for both the National Council of Senior Citizens and a support center of the Legal Services Corporation.  After law school, he clerked for the Honorable Walter J. Skinner in the Federal District Court of Massachusetts.

After working briefly for the Boston law firm of Ropes & Gray, he served as Acting Deputy Assistant Secretary for Human Services Legislation at the U.S. Department of Health and Human Services (HHS), Counselor to the Commissioner of Social Security, Associate Counsel to Presidents Reagan and Bush, and General Counsel of the U.S. Department of Health and Human Services.  He successfully tried the first federal HIV discrimination enforcement case and successfully argued the first federal patient dumping enforcement case.  While General Counsel of HHS, he had a concurrent appointment on the U.S. Architectural and Transportation Barriers Compliance Board during the period when the Board issued many of the first regulations under the Americans with Disability Act.

After a brief period as a partner of the Boston law firm of Mintz Levin, he worked for fourteen years in the biotechnology industry, most notably as General Counsel of Biogen and as the CEO brought in to lead the highly successful turnaround of TKT.  He also taught biotechnology law and policy at Boston University and served as Chairman of the Massachusetts Biotechnology Council.

As Commissioner of Social Security, he has focused his efforts on reducing the disability backlog and improving service to the public, particularly through electronic services.  He has spearheaded highly successful new systems for fast-tracking disability claims, created National Hearing Centers to reduce local backlogs with video hearings, and both expanded and overhauled the agency’s suite of electronic services to make them simpler, faster and far more user-friendly.

He has served as a member of the board of the Kenneth B. Schwartz Center, an organization whose mission is to support compassionate health care, as Vice Chair of the Massachusetts High Technology Council, and as a board member of a number of biotechnology companies.  He has received numerous awards and honors, including the Public Health Leadership Award from the National Organization of Rare Disorders and the Humanitarian of the Year Award from the Alzheimer’s Association.

Commissioner Astrue is from Massachusetts.  He is married and has two adult children.