Dr. Reggie Brothers, Under Secretary for Science and Technology, Department of Homeland Security

What is the mission of the Science and Technology directorate?

What are the strategic vision and five priorities of the Science and Technology Directorate?

An overview of research and development efforts.

How is the department innovating and acting as a strategic partner in the digital age? 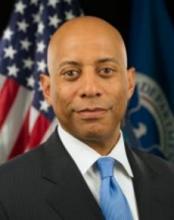 Dr. Reginald Brothers was confirmed by the U.S. Senate on April 7, 2014, for the position of Under Secretary for Science and Technology at the U.S. Department of Homeland Security (DHS). As Under Secretary for Science and Technology, Dr. Brothers is the science adviser to the Secretary and Deputy Secretary of Homeland Security and is responsible for oversight and management of the Science and Technology Directorate (S&T), the Department’s primary research and development arm and technical core. Through his leadership of S&T, Dr. Brothers is responsible for a science and technology portfolio that includes basic and applied research, development, demonstration, testing, and evaluation with the purpose of helping DHS operational elements and the Nation’s first responders achieve their missions in the most effective, most efficient, and safest manner possible.

Dr. Brothers is a science and technology leader and expert with more than 20 years of demonstrated success across the private and public sectors. He has held a variety of positions within the scientific and technological community that demonstrate his leadership and technical aptitude. This includes his prior service as a Technical Fellow and Director for Mission Applications in the Communications and Networking Business Area at BAE Systems, as a member of the Board on Army Science and Technology within the National Academy of Sciences, and as a Program Manager for the Defense Advanced Research Projects Agency. This also includes his experience as a Group Leader at the Charles Stark Draper Laboratory and as Chief Architect at Envoy Networks, a successful 3G wireless start-up company.