Dr. Phyllis Schneck serves as the Deputy Under Secretary for Cybersecurity and Communications for the National Protection and Programs Directorate (NPPD).  She is the chief cybersecurity official for the Department of Homeland Security (DHS) and supports its mission of strengthening the security and resilience of the nation's critical infrastructure. 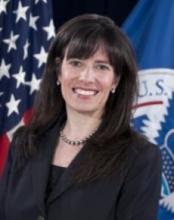 Dr. Phyllis Schneck serves as the Deputy Under Secretary for Cybersecurity and Communications for the National Protection and Programs Directorate (NPPD).  She is the chief cybersecurity official for the Department of Homeland Security (DHS) and supports its mission of strengthening the security and resilience of the nation's critical infrastructure.

Schneck came to DHS from McAfee, Inc., where she was Chief Technology Officer for Global Public Sector. She was responsible for the technical vision for products and service for public sector as well as global threat intelligence, industrial control system security and telecom strategy. She drove strategic thought leadership around technology and policy in cybersecurity and led initiatives in adaptive security and intelligence in networks for critical infrastructure protection and cross-sector cybersecurity.

Schneck has had a distinguished presence in the security and infrastructure protection community. She has served as a Commissioner on public-private partnership, and a working group Chair for the CSIS Commission to Advise the 44th President on Cybersecurity.

Schneck was the Chairman of the Board of Directors of the National Cyber Forensics and Training Alliance, a partnership between corporations, government and law enforcement for cyber analysis to combat international cybercrime. Schneck was also Vice Chairman of the NIST Information Security and Privacy Advisory Board.  Schneck was recently named the Loyola University Maryland David D. Lattanze Center 2012 Executive of the Year.

Schneck served eight years as chairman of the National Board of Directors of the FBI’s InfraGard program and founding president of InfraGard Atlanta, growing the program from 2,000 to over 30,000 members nationwide. She was responsible for the strategic growth and vision of the private sector side of InfraGard, often representing InfraGard in the creation of national policy. She was chiefly responsible for the first Memorandum of Understanding between DHS and InfraGard and increasing InfraGard’s engagement with DHS officials nationwide.

Named one of Information Security Magazine’s Top 25 Women Leaders in Information Security, Schneck has briefed numerous foreign governments on information sharing and infrastructure protection, has worked with the UK infrastructure protection and cybersecurity authorities on US partnership, and moderated the White House Town Hall Meeting in Atlanta for the National Strategy to Secure Cyberspace. She holds seven information security patents and has six research publications in the areas of information security, real-time systems, telecom and software engineering.

Before joining McAfee, Schneck was vice president of Research Integration for Secure Computing, where she conceived and built the early intelligence practice into a full Beta program for data as a service. Prior, Schneck was the vice president Enterprise Services for eCommSecurity. Prior to that, she served as vice president of Corporate Strategy for SecureWorks, Inc., and was founder and chief executive officer of Avalon Communications, a provider of real-time security technology, since acquired by SecureWorks, Inc. Schneck also held various information science technical positions with CygnaCom Solutions, the MITRE Corporation, Computer Sciences Corporation, IBM Systems Integration Division, NASA Goddard Space Flight Center and the University Of Maryland’s Department of Meteorology.