Carla L. Provost is the Acting Chief of the U.S. Border Patrol, located in Washington DC.

Overview, history, and mission of the U.S. Border Patrol

Opportunities and Challenges Around Hiring 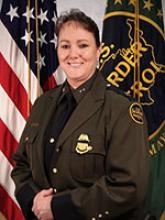 Carla L. Provost is the Acting Chief of the U.S. Border Patrol, located in Washington DC.

In 2013, Acting Chief Provost became the Chief Patrol Agent of the El Centro Sector, where she led 1,200 employees and oversaw all operations within her area of responsibility. In 2015, she became the Deputy Assistant Commissioner of the Office of Professional Responsibility, where she oversaw compliance with all CBP-wide programs and policies relating to corruption, misconduct, or mismanagement. In 2016, Ms. Provost was selected as the Deputy Chief of the U.S. Border Patrol.

Among Acting Chief Provost’s many accomplishments in her distinguished career, is her successful standup of CBP's Use of Force Center of Excellence, newly named the Law Enforcement Officer/Agent Safety and Compliance Directorate (LESC), which is responsible for the development and articulation of all CBP use of force policies and provides the agency with comprehensive and operational Use of Force programs. Acting Chief Provost also led the CBP-wide implementation of Comprehensive Use of Force Policy/Law Training, with 100 percent compliance by all CBP law enforcement-covered employees in support of the newly released Use of Force Policy. Acting Chief Provost served as an instructor for bike patrol units, firearms training, and post-academy law while stationed at the Tucson Sector, and while at the Yuma Sector, she directed sector budgets and human resources, and later oversaw all station operations.

Prior to joining the U.S. Border Patrol, Acting Chief Provost served for 2 1/2 years as a police officer with the Riley County Police Department in Manhattan, Kansas. She earned a Master of Science degree in National Resource Strategy from the Industrial College of the Armed Forces at the National Defense University in Washington, D.C., and a Bachelor of Science degree in Sociology/Criminal Justice from Kansas State University.