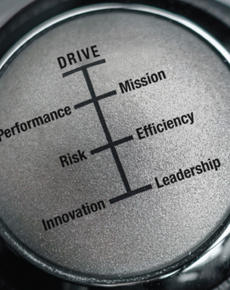 Given budget austerity and increasingly complex challenges facing government executives, managing risk in the public sector has increasingly taken on new significance. Risks take on many forms, including national security risks via cyber­attacks, economic risks from natural disasters, budget and program risks, or privacy risk. However, government leaders lack an accepted culture and framework in which to properly understand, manage, and communicate risk.  Recognizing the spectrum of different kinds of risks, and developing strategies and tools to incorporate risk into decision-making and action can help government drive change ensure successful management of programs and missions.

Accepting Risk as a Condition of Action

Risk is inherent in every facet of society.  In our personal lives, there are risks to health from eating bad foods, risk of injury or damage from driving a car or living in a zone where extreme weather events (hurricanes, tornadoes, floods) occur, and in the modern world risk of financial or identity theft due to online banking fraud.  People understand that such risks are inherent, and generally support action to reduce the impact of those risks – such as standards for food inspections, building safer cars and homes, and payment of fees to banks to help defray the cost of online fraud.

Successful commercial enterprises assess the risks they face, and develop responses to manage those risks.  These range from paying insurance in advance so that they can recover losses, to moving to less risky methods of production (which can reduce costs from an unsafe workplace), to informing the public in advance that a risk may occur and what will happen if it does (such as when credit card companies tell individuals in advance about loss limits if their online accounts are compromised).

In the government, risks have been primarily seen as constraints to minimize, avoid, or hide in a corner. With the exception of agencies such as FEMA, whose mission is to respond to risks when they occur, most federal agencies tend to attempt risk reduction rather than risk management.  As a result, when something goes wrong – which, given the world in which we live, will inevitably occur – agencies, their constituents, and their overseers often react to the immediate problem, rather than understanding in advance how to develop strategies to respond to issues that will arise.  Every agency faces financial management, worker skillset, or other risks; few agencies think in advance about how to understand what may happen in these and other domains, how to communicate that potential in advance to their employees and stakeholders, and how to be resilient in the face of disruption.

Complicating the government picture further, a different kind of risk calculus faces the national security community every day, from both nation states and small who operate relatively independent of any nation state. Long range, precision threats are now achievable via cyber attack to a wide range of people and groups, well outside the bounds of nation state controls.

Turning from Risk Avoidance to Risk Management and Acceptance

Given the rapid pace of change that government faces, it is imperative that agencies turn from a culture of risk avoidance to one of risk management.  A thought-provoking approach to how this change can occur appears in a Harvard Business Review article, “Managing Risks:  A New Framework,” by Robert Kaplan and Anette Mikes.  Kaplan and Mikes note that “risk management is too often treated as a compliance issue that can be solved by drawing up lots of rules and making sure that all employees follow them.”  In addition, many organizations compartmentalize their risk management functions along business lines (credit risk, operational risk, financial risk) and this “inhibits discussion of how different risks interact.”  Such categorizations can miss many kinds of risks that organizations face.

Kaplan and Mikes developed a three-part framework “that allows executives to tell which risks can be managed through a rules-based model and which require alternative approaches.”

Kaplan and Mikes observe that “each approach requires quite different structures and roles for a risk-management function.”  One way to integrate these approaches is to anchor risk discussions into strategic planning, which already brings together organizational goals and objectives and points to positive action rather than constraints -- turning the conversation to a risk strategy that aligns with “the ‘can do’ culture most leadership teams try to foster when implementing strategy.”

Further perspectives for government in this arena come from Tony Bovaird and Barry Quirk, who in “Reducing Public Risk and Improving Public Resilience:  An Agenda for Risk Enablement Strategies" introduce the concept of “risk enablement” as a means of moving toward a positive and forward-looking agenda that focuses on risks to citizens and businesses who receive government services, rather than a traditional view of risk to internal organizations.  Risk enablement can help “decision makers in the service system to choose activities with appropriate levels of risk, rather than assuming that risk minimization is always right’; related to this is the concept of building resilience into federal programs and activities, so that as risks manifest the agency is better equipped to address them.

Getting the Word Out About Risk

A key element of addressing risks facing federal agencies involves effective risk communication:  understanding what risks might affect an agency’s constituents, and then proactively getting the word out about those risks.  FEMA, for example, already exercises this strategy, advising individuals living in hurricane zones about potential outcomes, so that the public and the agency are better prepared if and when a storm arrives.  If other agencies were to identify risks that could occur and similarly communicate them in advance, this would bring numerous benefits:

As government operates in a world of increasing complexity, and as citizens expect better, faster, and more cost-effective results, addressing risk that can interfere with normal operations becomes ever more critical. Getting ahead of risks can help leaders manage and respond to risks to foster success within and across programs; partnerships with industry, non-profits, researchers, and citizens allow government to incorporate risk response frameworks appropriately.  By doing so, agencies can avoid the traps that come from a reactive mode toward inevitable risk – instead, they can gain visibility of risks in advance, communicate impacts, and be resilient in response in a way that enables positive outcomes.

Hardy, Karen, Managing Risk in Government: An Introduction to Enterprise Risk Management, IBM Center for The Business of Government. 2010.

Read the other blog posts on Six Trends Driving Change in Government: