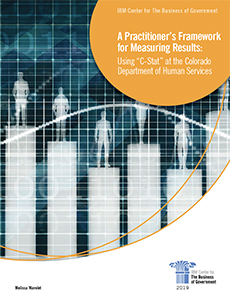 Tuesday, March 5, 2019
John Kamensky
Good leaders can organize a campaign or an initiative to achieve near-term results by focusing resources, attention, and leadership. But campaigns and initiatives have beginnings, middles, and ends.

The big challenge for top leaders is - How do you create a leadership framework to achieve results, day-in and day-out, in a sustainable way, that stays focused and doesn’t let the organization get distracted by the inevitable headline-grabbing urgencies that arise on a regular basis that sap focus away from key mission goals?

Background.  Meeting and sustaining a high level of performance was the challenge facing Colorado’s Department of Human Services (CDHS) when Reggie Bicha was appointed by the governor to lead it in 2011.  The department was under a 2008 court order to improve the processing of new food and cash assistance applications to vulnerable citizens “in a timely manner 95 percent of the time for at least 12 consecutive months” in order to meet the terms of the settlement agreement. At that point, only about 40 percent of applications were processed in a timely manner.

Meeting the goal of 95 percent could be achieved via a concerted campaign, but this was only a small subset of the 25 human service programs run by the department, and campaign would not assure meeting that target consistently and indefinitely.  Bicha decided to use a broader performance leadership strategy to tackle this and other persistent performance problems facing the department, and this included influencing how each of the 64 counties, and state contractors, managed their portions of these programs, as well.

What Is the C-Stat Framework?  In a new report for the IBM Center by Melissa Wavelet, a former performance staff lead for Bicha, gives an insider’s perspective of how the department developed, and its county and contractor partners jointly used, a new leadership framework to managed their programs on a day-to-day basis.  This approach, which they dubbed “C-Stat,” was inspired by a two-decade old management approach that Harvard professor Bob Behn calls “Performance-Stat.”

Wavelet details how the C-Stat framework was developed, implemented, and sustained over the seven years Bicha led the department.  C-Stat, she writes: “is comprised of a set of administrative routines for collecting, analyzing, deciding, and acting upon performance information on a regular basis and involving top organizational leaders. But having a set of routines is different than using the routines to drive results.”

She says C-Stat routines changed how top and mid-level managers managed, and how county officials and contractors did their work.

Leaders Drive Change. The routines created by C-Stat incentivize CDHS leaders to focus on the use of data and learning strategies. This ultimately helped top, mid-level, and front-line managers to be more strategic, problem-solving, and focus on measuring the outcomes and outputs that define success.

The department’s executive leadership team began to approach performance anomalies with a greater sense of urgency, since C-Stat expected them to report back to their peers on progress in 2 to 4 weeks. They rarely accepted “I don’t know” or “I can’t tell,” as acceptable answers. They became relentless in collecting and analyzing data to diagnose and solve problems.

Likewise, mid-level and front-line managers responded.  Wavelet said they quickly understood “C-Stat is not an administrative function to comply with in addition to the ‘real work.’ C-Stat is about the real work.”  These managers began to carefully select the measures used for their C-Stat reviews, with an emphasis on metrics that incentivized achieving the desired outcomes. They also spent time with their staffs preparing for potential questions that would likely be raised in C-Stat sessions.

“C-Stat has helped everyone—including county and contractor partners—to engage in a data-driven dialogue focused on improving performance. This results in increased ownership of the challenges faced and data-driven dialogues, as well as the use of what is learned from the data to prioritize action.”

After some degree of reluctance, counties became avid consumers of their own performance data and began using it to monitor their own performance. This increase use was enabled by the creation of monthly C-Stat reports and subsequently, an on-line Dashboard. These one-stop portals combined data from nine separate systems and made it easier to analyze.

This increased “space” allowed counties and contractors from the position of spending a lot of time to compile and interpret data, to a position where they could use it to learn what worked and what didn’t, and what they needed to try to fine-tune their steps going forward.  CDHS also created a peer-to-peer learning network so counties could “learn from one another and to share successful practices that might work in other counties.”

Results. As a result of employing the C-Stat framework, the statewide performance for processing food and cash assistance applications exceeded the court-mandated 95 percent goal for the first time in April 2016. This goal was maintained in the months that followed.  As a result, the terms of the court settlement agreement were finally reached – nearly ten years after they were imposed. Sustaining the goal continues to be a challenge, but by incorporating these measures into the ongoing C-Stat process, the level of attention and ability to quickly correct deviations is in place.

This framework led to improved performance in other programs as well.  For example, CDHS virtually eliminated the use of seclusion for mental health patients; it doubled the number of children receiving child care subsidies; and it nearly doubled the number of timely monthly contacts for at-risk adults.

What’s Next?  Bicha left Colorado state government at the end of the governor’s term in early 2019.  The biggest challenge of every performance management system is – will it survive the transition to a new leader?  In the case of C-Stat, the new governor, Jared Polis, has signaled his support for the C-Stat approach, and possibly extending it statewide.  His new director of operations and cabinet affairs, Tony Gherardini, previously oversaw CDHS’s C-Stat framework.

Gherardini said that in that role: “I became accustomed to using data to understand how operations, policies and funding affected performance across a wide range of programs throughout the state. In my role with Human Services, I served proudly as a part of an executive team that valued data-driven decision making, and a culture of learning and continuous improvement.  It is this experience with C-Stat that has proven invaluable in developing and implementing measurable, attainable, ambitious goals for the Polis administration.”