The Best Transition In History 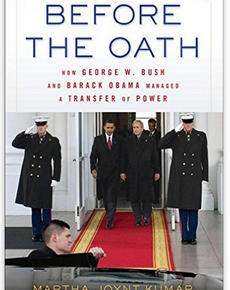 Wednesday, July 22, 2015
Alan Howze
Presidential scholar Dr. Martha Kumar was joined by Chris Lu, Deputy Secretary of Labor and Former Executive Director of the Obama-Biden Transition Project, and Clay Johnson, former Bush (43) Presidential Personnel Director and Deputy Director of Management at the U.S. Office of Management and Budget, for a discussion on best practices in Presidential transitions and the importance of focusing on management in the transition and early days of an administration.

The Bush to Obama transition was the smoothest in our nation’s history, because the two leaders made it a priority to invest significantly in planning and preparation. The details of this successful transition are the subject of a new book, “Before the Oath,” by noted Presidential scholar Dr. Martha Kumar.

Recently, Max Stier, President and CEO of the Partnership for Public Service, hosted a panel discussion that focused on Dr. Kumar’s insights from her research and dozens of interviews.  Labor Deputy Secretary Chris Lu, who served as Executive Director of President Obama’s 2008 transition team; and Clay Johnson, who was a key advisor to President George W. Bush and ran the Presidential Personnel Office (PPO) at the beginning of the Bush administration, joined Dr. Kumar in a fascinating and wide-ranging ninety minute discussion.

The Partnership, through its Ready to Govern initiative, and the IBM Center for The Business of Government have teamed together to develop a Management Roadmap for the next administration. So, while management was not the focus on the panel, it was of great interest to hear Lu and Johnson both speak about the importance of infusing management capabilities into a new administration in order to bolster the policy and political fortunes of the President.

As the panelists made clear, irrespective of political party or ideology, there are core management actions and skills that every administration can – and should – take to ensure the smooth operations of government and to drive the effective implementation of policy objectives. In fact, there was very little daylight between Lu and Johnson on the importance of management. As Chris Lu noted “the business of government needs to keep running.”

Some of the panel insights and suggestions included:

Over the next 18 months, as the IBM Center and the Partnership develop the Management Roadmap, we will continue to draw upon the insights and experiences of a diverse set of political and career leaders. We will also seek to adhere to the panel’s leadership lesson – to start with clear goals. Our goal? To help the next administration drive sustained improvement in government’s capacity and effectiveness to support mission outcomes.

Developing a Management Roadmap for the Next Administration

The Foundation for Effective Government Management in 2017 Starts Now

You’ve Won the Presidential Campaign — Now Can You Govern?

How Can the Next Administration Build A Strong Political and Career Leadership Team?