Agile Regulation Gateway to the Future: A New Framework

Wednesday, June 29, 2022
G. Edward DeSeve
“Regulation can struggle to keep pace with innovation, hindering the introduction of new ideas, products and business models, while leaving citizens with outdated protections. A more agile, flexible approach to regulation is needed.” From: Agile Regulation for the Fourth Industrial Revolution by the World Economic Forum

The stark warning above is a reminder that the pace, process, and outcome of government regulation is an important ingredient in improving the economic welfare of the world.

To address this problem, the Agile Government Center, led by the National Academy of Public Administration in partnership with the IBM Center for the Business of Government, published its latest major report, “Agile Regulation: Gateway to the Future.” This report is intended for both U.S. regulatory agencies and the regulated public.  The report will help agencies keep up with new demands by adopting Agile practices to increase stakeholder satisfaction, allow for more iteration on outputs to learn lessons about what works best, empower staff members, and maximize team and network performance, meet critical public needs, and improve trust in government.

The report introduces a Framework for developing Agile regulatory practices, helping  agencies undertake their vital public missions within current law and policy.  The nine tenets of the Report are organized across four major categories of regulatory issues. 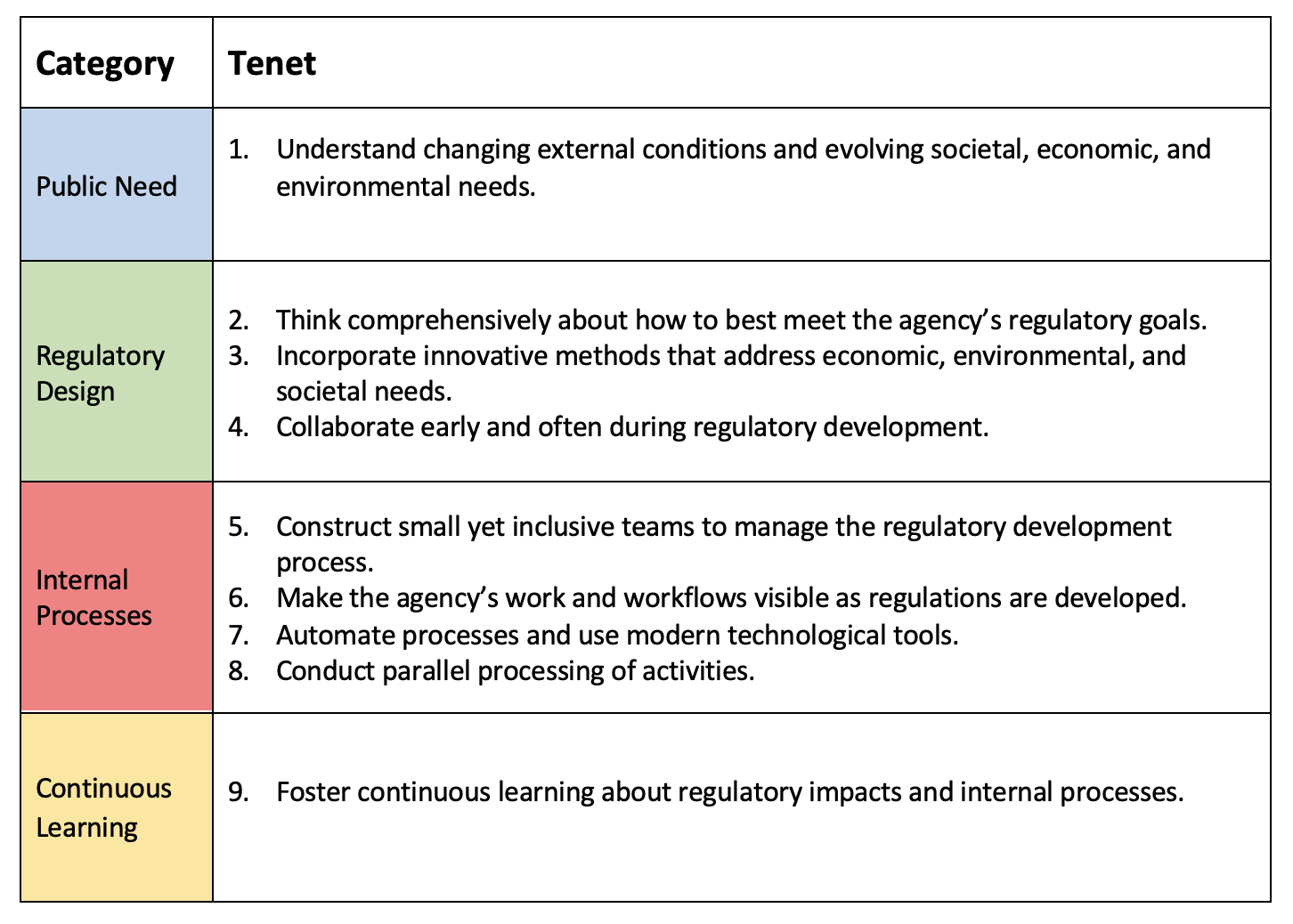 These tenets give regulators and regulated entities a one page “roadmap” for taking actions to make the regulatory process more agile.  In so doing, agencies can produce greater competence within government organizations, create more public value through their regulatory programs, and ultimately increase trust in government.

The Agile Regulatory Framework uses the “Agile Government Principles” first articulated in 2020, which have been continuously updated.  This Framework also provides a foundation for the overall Agile Government Integrated Framework for Action, currently being developed in consultation with the Agile Government Network that consists of dozens of leaders and stakeholders in the U.S. and globally.

As the Report notes, not all tenets apply in every case.  However, the Agile Regulatory Framework can guide discussion of the need for and characteristics of regulations, their timing, and the process for developing and implementing them in a structured and thoughtful way.  The Report was presented to the Agile Government Network on June 22nd and was hailed by the members as a major advance in Agile Government and the regulatory process.  Additional material from the meeting can be found on the Academy website.

The Future of Agile Regulation

The Regulatory Report presents case studies from the Nuclear Regulatory Commission, the Department of Health and Human Services and the United States Coast Guard.  These cases show how the tenets of the Report were applied in the real world.  This Report’s regulatory framework suggests a new approach that can be adopted at all levels of government, not just regulation, but also policy development and program implementation.

The future of Agile regulation, as well as the future of Agile government as a whole, calls for a new mindset that puts serving the customer and the public first, and for cross functional teams to address difficult problems quickly and persistently.  A new type of leader for Agile teams builds networks and empowers the workforce to create solutions in collaboration with and in recognition of priorities from the public.

The Agile Government Center stands ready to assist agencies at all levels of government with the work of Agile regulation and other Agile government endeavors. We look forward to further the successes from this network in terms of greater competence, increased public value and trust in government.

Read the third blog in the series on Agile Leadership.