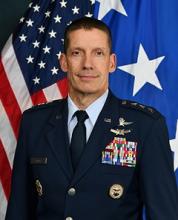 As Director of the Defense Information Systems Agency, Lt. Gen. Skinner manages a global network and leads nearly 19,000 service members, civilians and contractors who plan, develop, deliver and operate joint, interoperable command and control capabilities and defend an enterprise infrastructure in more than 42 countries. This mission directly supports the President, Secretary of Defense, Joint Chiefs of Staff, combatant commanders, U.S. Department of Defense components, and other mission partners across the spectrum of, competition, combat and combat support operations.

As Commander of Joint Force Headquarters-Department of Defense Information Network, he is charged with leading unified action across DoD to secure, operate and defend the DoDIN. He leads the establishment of DoDIN priorities and directs threat-informed actions through formal planning and future operational initiatives, as well as the command and control of daily unified network operations, cyber security actions and defensive operations on the DoDIN.

He was commissioned through Officer Training School (second honor graduate) in 1989. He has served in various tactical and fixed communications assignments, plans, policy and resource staff work. He has commanded at the squadron, group, wing and Numbered Air Force (NAF) levels and served on the staffs at a NAF, major command headquarters, Headquarters Air Force and the Joint Staff. Prior to assuming his current position, he was the director of Command, Control, Communications and Cyber at U.S. Indo-Pacific Command on Camp H.M. Smith, Hawaii.