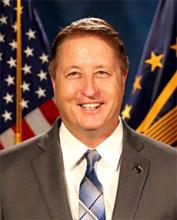 William F. (Bill) Moore is the Defense Commissary Agency’s Director and Chief Executive Officer. His appointment was effective August 3, 2020. As DeCA’s Director and CEO, Mr. Moore oversees the operations of a global agency, with annual sales approaching $5 billion that employs more than 13,000 people at nearly 240 commissaries.

Son of an Army combat veteran, non-commissioned officer, Mr. Moore was appointed to the Senior Executive Service (SES) in October 2006. His prior assignment was the HQDA Assistant Deputy Chief of Staff, G4 (Tier 3), where he was responsible for Army logistics plans, policy and programs. In this role, he served as the Army's leading expert and foremost authority on logistics.

Previously, he served as the Deputy Chief of staff G-1/4 (Personnel, Logistics and Engineering), U.S. Army Training & Doctrine Command (SES Tier 2). In this capacity, he was responsible for human resources, logistics, engineering, and integration of base support programs, while administering diversity, medical, safety, and history functions for a 4-Star global command.

Prior to that role, he served as the deputy to the Commanding General of the Army’s Combined Arms Support Command & Fort Lee (SES Tier 2), Virginia, where he oversaw a 5,000-person work force across 10 states with a combined budget of more than $350 million, leading Army sustainment capabilities development, along with the annual training and leader development of more than 180,000 soldiers, other service members and civilians.

In all, Mr. Moore’s experience spans more than 37 years serving our military and their families.