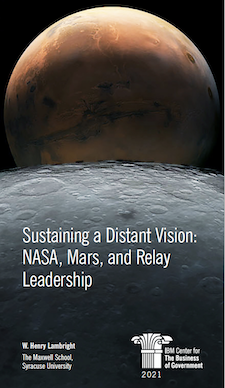 W. Henry Lambright
A moon landing in the late 2020s and a journey to Mars in the latter 2030s are technically possible. As a nation, will we marshal the political will and resources to make it happen?

In October 2020, three former NASA administrators—Dan Goldin, Sean O’Keefe, and Charles Bolden—convened with the then incumbent, James Bridenstine, to ponder the state of NASA and human space exploration. Goldin (1992-2001) chafed at the slow pace of returning to the Moon and going on to Mars. He pointed out that China was “moving at the speed of light” and it was “damn time for America to get people out of Earth’s orbit.”

O’Keefe (2001-2005) was more sanguine. Referring to President George W. Bush’s 2004 decision to return to the Moon and then travel to Mars and beyond (his “Vision for Space Exploration”), O’Keefe cited progress and “what we’ve seen come to pass” since Bush was in line with the “Vision.” He saw “elements of a consistent, sustainable kind of strategy, over the course of the last couple of decades” (Foust, 2020).

Which administrator was correct? In a way, they both were. There had been positive movement but it had been slow and tortuous. There had evolved a clear consensus that the country wanted to get out of low-Earth orbit, and move beyond the International Space Station. But the nation had had problems in turning desire into policy. Still, there have been earlier calls for going back to the Moon and on to Mars and these had gone nowhere. Would the situation be different in the 2020s?

Read our newly released report, "Sustaining a Distant Vision: NASA, Mars, and Relay Leadership" by author W. Henry Lambright and learn how he gathered insights from a group of experts in leadership roles with NASA to better understand the moon, mars, and beyond.