Social Security in the BRIC Countries 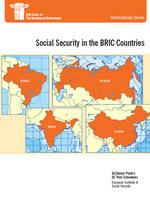 Social security is a well-established part of the societal landscape in traditional westernized countries. There are a variety of approaches, and there are substantial differences between the operation of social security under the predominantly insurance-based (or Bismarckian) systems and the social assistance (Beveridge) systems. But both were developed and matured in the context of the industrialization of societies and both reflect the need to provide social protection in mass-scale workforces. It is recognised that (at least historically) the development of social security was seen as a natural complement to the process of economic development. Indeed, they can effectively be characterized as two sides of the same coin.

But what can we draw from the lessons of history and how much do these lessons apply to countries undergoing the 21st century equivalent of the industrial revolution? The so-called BRIC (Brazil, Russia, India, China) countries are experiencing the same kind of growth and rapid change experienced in western economies almost two centuries ago. Certainly, there are similar demands and pressures to balance economic advancement with social protection for those workers who provide the labour to fuel the economic development.

This report examines the existing nature of social security in the BRIC countries in order to consider the likely trajectory of its future development. The report provides a useful reminder that, whilst the underlying pressures are at least to some extent similar,
the starting places and norms are quite different. Also, the globalised world of the 21st century brings new pressures compared with the conditions that applied in the 19th and 20th centuries.

Given the above factors, the following question emerges, “Can we expect these societies to follow the same trajectories and end up with similar systems of social security to those we observe in the western world—or will they evolve differently?” Undoubtedly more work is required to resolve the question. This report provides evidence on the current context from which to start considering likely answers.

As noted above, this report continues IBM’s longstanding interest in this topic. In 2011, the IBM Center and the European Institute for Social Security published a report, Case Studies in Merging the Administrations of Social Security Contribution and Taxation, by Effrosyni Bakirtzi, Professor Paul Schoukens, and Professor Danny Pieters. That report examined the collection systems of five different European countries and gave an overview of the lessons learned from the different practices adopted in this field. Earlier, the IBM Center published Cooperation Between Social Security and Tax Agencies in Europe by Bernhard Zaglmayer, Paul Schoukens, and Danny Pieters. In that report, the authors argued that as social policy continues to evolve, governments now may need to look beyond the traditional structures of social security and taxation.