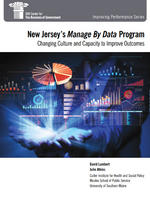 Over the last decade, a major trend in government management has involved the increased use of data by government executives. The “data” movement has many names. In Robert Behn’new book, The PerformanceStat Potential, “PerformanceStat” refers to the many “Stat” programs initiated after the New York City Police Department successfully launched CompStat in the 1990s. Others use the term “analytics” to capture the use of data.

While the trend toward increased use of data to measure performance has received much attention, the training that civil servants
need to use data effectively has received less attention.  In response to this lack of emphasis, the IBM Center sponsored a study to examine the New Jersey Department of Children and Families’ (NJDCF) implementation of a Manage By Data executive education program. Following reform efforts required to improve the state’s child welfare system, New Jersey implemented an automated child welfare information system, drawing on the extensive amount of system data now available. The next challenge was to develop the ability of the state’s child welfare managers to effectively use data.

The challenge NJDCF faced was not just to use data more effectively; more importantly, it was to change the agency’s culture to become more performance- and outcome-driven. Starting in 2009, the department began designing the Manage By Data training program. Ultimately, 100 agency managers were selected to compete to join the first cohort class. Fellows were trained to become knowledgeable consumers of data, to more effectively utilize data to manage change, and to work to improve their organizations’ outcomes. Subsequently, two additional cohorts were launched.

Although the program’s initial focus was on training employees to make better use of data, its ultimate goal was to change the department’s culture. This report presents five strategies that organizations can follow to change their culture by moving toward data-driven decision making. These strategies include creating a common language, striving for quick wins, and aligning people and processes.

The report also includes a set of findings from the authors’ assessment of the Manage By Data Program. Lambert and Atkins found that the program had a clear, positive impact, and changed the way NJDCF conducts its operations. Agency staffers now use data on the job more effectively and make changes in agency programs based on their analysis of data. The report concludes with three recommendations on how agency leadership can implement a culture change initiative, including ways to better align data analytics programs with agency priorities
and processes.

We hope that government leaders who are interested in leveraging better use of data and in driving culture change will find this
report helpful and useful. As the authors demonstrate, for government organizations to use data and analytics effectively, they must train and develop their staff to make data a key part of organizational culture.