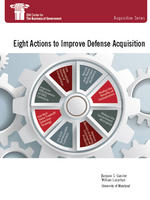 The authors present eight significant actions that the federal government can take to improve the federal acquisition process. While the report centers on acquisition in the Department of Defense (DoD) because of its dominant size in the federal budget, the eight proposed actions—which build on previous acquisition reforms including increased competition, more use of best value contracts, expanding the supplier base, and better tailoring of contract types to contract goals—apply to civilian agencies as well. The authors emphasize the urgency of acquisition reform in DoD given budgetary constraints and security challenges, finding that “DoD will need to gain every possible efficiency, while resisting the temptation to buy defense on the cheap.”

This report continues the IBM Center’s interest in better understanding and improving the federal government acquisition process. In 2013, The IBM Center released two reports in our Acquisition series. The first report, Controlling Federal Spending by Managing the Long Tail of Procurement, by David Wyld, provides the first quantitative analysis and recommendations about government “tail spend” (smaller, non-core expenditures that often receive less attention in cost control but can add up to a large overall amount).

A second report, A Guide for Agency Leaders on Federal Acquisition: Major Challenges Facing Government, by Trevor Brown, addresses three challenges facing government executives in the area of acquisition. These challenges include navigating the regulatory and oversight landscape, mitigating acquisition risk through contract design, and improving the acquisition workforce. Like the Brown report, this report highlights the importance of strengthening the federal acquisition workforce.

Taken together, these three reports set forth a clear agenda for improving acquisition at DoD and across the government. Current fiscal constraints call for consideration of major changes in acquisition policy and procedures. These reports offer insight on how government leaders can build a roadmap to improve performance while saving costs.

Listen to our podcast with the authors.