Distance Work Arrangements: The Workplace of the Future Is Now 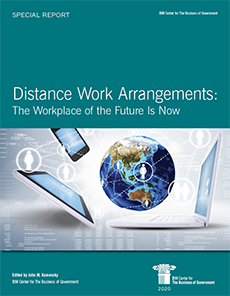 John Kamensky
Emily G. Craig
Michaela Drust
Dr. Sheri I. Fields
Lawrence Tobin
Distance work is already changing the paradigm for how we work. It allows employees to work virtually from anywhere in the world.

Distance work arrangements—such as telework, remote work, and distributed teams— have been a growing trend in the workplace for more than a decade. For example, the federal government adopted the Telework Enhancement Act in 2010. And some private sector businesses have moved their operations completely online and maintain a virtual workforce that allows employees to work from anywhere in the world.

But the adoption of distance work arrangements was slow, and industry observers predicted that it would take years to make the pivoted to a new workplace—home. federal, state, and local governments not only had to transition their workforces to work from home, but also had to change how they delivered services so they could be done remotely, such as using electronic signatures for contracts.

Initially, it was seen as a temporary stopgap measure. But within weeks, it became clear that the transition was likely to last for months, if not longer. And as managers and workers became more adept with the technology and tempo, organizations—both public and private—have become more open to distance work becoming the “new normal.” For example, the vice chief of staff of the U.S. Air Force said recently: “It’s changed the paradigm on how we’re going to do work” and that he envisions one-third of its workforce remaining in a distance work arrangement after the pandemic subsidies.

Attached are a series of essays by IBM colleagues as they observed the transition in the public and private sectors, and in their own lives. Most of these essays were first published in Washington Technology, which hosted a blog series on this topic between April and September 2020.

We hope you find their insights to be helpful guideposts and benchmarks as your organization and employees settle into a new workplace that is the future today.

Read press on the report: