Balancing Independence and Positive Engagement: How Inspectors General Work with Agencies and Congress 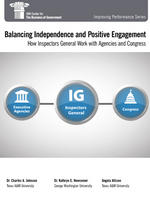 Dr. Charles A. Johnson
Dr. Katherine E. Newcomer
Angela Allison
The authors of this report undertook a series of confidential interviews with staff in three institutions to gather candid insights.

In the U.S. government, Inspectors General (IGs) are tasked by statute with important roles to promote government efficiency and effectiveness, including assessing and investigating fraud or waste, providing independent advice on agency performance and compliance, reporting to their host agency and Congress on their findings, and doing so in a way that maintains independence. This last role necessitates a careful balance for IGs to perform their work, because they must be independent from agency programs while working collegially with agency colleagues; all while providing key information to congressional oversight committees from which they are similarly independent.

In January 2015, Michael Horowitz, chair of the Council of Inspectors General on Integrity and Efficiency, said that the most-cherished attribute of the IGs is their independence. What can be done by the IGs, agencies, and Congress to maintain positive relations with agencies and Congress, in a way that respects the statutory independence of the IGs? The authors of this report undertook a series of confidential interviews with staff in each of these three institutions to gather candid insights. The report identifies four success factors associated with positive engagement between the IGs, agencies, and Congress:

The authors then distill a series of promising practices identified by interviewees that could contribute to improved interactions among the three institutions regarding the roles of the IGs and these institutions’ collective efforts to improve the management of government.

The role of Inspectors General is an important one in our governmental system. We hope that the IG community, and more broadly stakeholders interested in improving governmental performance, find the insights and recommendations in this report helpful in furthering their joint efforts.

Listen to the interview on Federal News Radio.