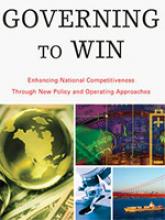 Charles Prow has compiled a series of insightful essays by leading thinkers and practitioners that offer a long-term strategy to improve national competitiveness. “Given today’s fiscal realities,” Prow explains, “the nation must explore alternative policy approaches and ways for government to do business.” He notes that the alternatives outlined in his new book can catalyze national competitiveness in an environment where major new investments will be difficult.  Policy makers and business professionals will find this a timely and compelling book in advance of the upcoming election.

Section I: The Imperative to Create Long-Term Fiscal Sustainability

Sets the context for the current national debate on fiscal stability by describing the long-term structural debt of the country, which will be a key priority of policymakers in coming years.  Offers a path for creating a nonpartisan framework for setting national priorities in that context, which should foster fiscal sustainability and thereby enhance national competitivenes.

Identifies targeted policy interventions in key sectors of the economy that could lead to improved national competitiveness, but within the context of the fiscal austerity our nation will face for the foreseeable future.

Section III: Moving to an " Enterprise USA" Approach in Government Can Enhance Competitiveness

Offers a value-oriented, enterprise operating model for the federal government, based on commercial experience, which could lower operating costs by up to $1 trillion over a decade while improving mission performance and services to citizens.  Because the federal government, as an enterprise, is such a large segment of the overall economy, this new operating model could bring about similar changes in the broader economy, thereby improving productivity and enhancing national competitiveness.

Chapter 10: Use Technology to Enhance Productivity

Chapter 13: Expand the Use of Shared Services