What Are the Chances? 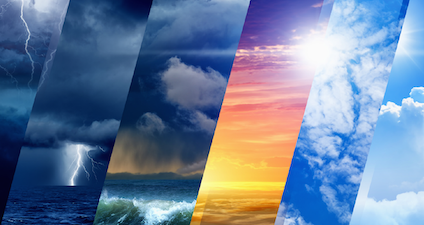 And this happened just two years after it was similarly devastated by -- a one-in-one thousand-year flash flood. But this isn’t an anomaly. In the case of weather-related natural disasters, the National Oceanic and Atmospheric Administration (NOAA) says that the past decade has been unprecedented in the number of billion-dollar disasters.  It reports that there were 28 such disasters in the decade of the 1980s, while there were 119 billion-dollar or more disasters in the 2010s. And NOAA projects more highly violent and frequent storms to continue, given the growing influence of climate change.

So, how do communities – especially small towns – manage the looming specter of a natural disaster? Can they do something in advance?

A new study by a team of researchers – Katherine Willoughby, Komla Dzigbede, and Sarah Beth Gehl – analyzed the responses of hundreds of local government leaders to surveys conducted by the International City/County Managers Association (ICMA).  They also interviewed nearly two dozen local leaders that experienced disasters, about their experiences with managing their community’s recovery. Based on this information, they identified obstacles and promising practices for local leaders.

Local officials surveyed by ICMA shared their disaster management experiences.  While their experiences differed widely because of the unique circumstances of each disaster, they described some common obstacles. Their observations were reinforced by findings in a March 2020 report on emergency and disaster management responses by the National Academy of Public Administration (NAPA).

Lack of clarity in roles and expectations.  Based on the ICMA survey results, many localities perceive the Federal Emergency Management Agency (FEMA) is less responsive than in the past.  However, in fact, the number and size of natural disasters has dramatically increased over the past couple of decades – but FEMA has not.  By federal law, FEMA was never really designed to be the first responder.  Rather, the Stafford Act stipulates that the strategy for any disaster response and recovery is to be executed locally, managed by the state, and supported by the federal government as planned in the National Response Framework.  This lack of local understanding of FEMA’s role was reflected in the NAPA report as well.

In reality, the researchers note: “Local governments are on the ground level, closest to the people and communities affected. They can respond more quickly in the aftermath of a disaster, but also can put in place prevention mechanisms prior to disaster, such as building codes, emergency preparedness drills, and continuity of operations, sustainability and/or resiliency plans that reduce the costs of recovery after disaster.”

One size doesn’t fit all. There are four overarching objectives of every effective emergency management system -- prevention, preparedness, response, and recovery.  But typically, there isn’t a commons response that works in most cases.  The authors observe: “To discern definitely what works and what does not in the event of disaster is virtually impossible. . . . every community is unique as is every disaster; recoveries are distinctive in that no two are alike. What works well in one instance, may not work at all in another. “ So, prescribing a single solution would be ineffective.

The lack of investment in resilience. The ICMA survey found that 87 percent of communities responded that they have plans in place for disaster response, such as emergency evacuations.  However, less than one-third have resilience plans in their communities to reduce the potential impact of a natural disaster – such as floods or fires – in advance of such a disaster. Even fewer -- only about one fifth -- reported that they dedicate a line item in their budgets for environmental sustainability, including disaster readiness. FEMA’s former deputy administrator, Joseph Nimmich, observes that the single biggest opportunity for reducing the impact of disasters in a community is to invest in a resiliency approach via thoughtful long-range land-use planning, building standards, and zoning.

Overlapping challenges in infrastructure, management, and finance.  The ICMA survey results also highlighted concerns about three common, interrelated challenges – deferred maintenance in infrastructure such as water treatment plants, sewer systems, etc.; the management challenges of preparing for a wide range of different potential disasters; and the financial challenges of being able to build a cushion of reserves in case of a disaster that affects a community’s revenue base.  But these enduring challenges are really all about thinking long term – not just responding to specific instances of disaster.

Based on interviews with local officials, the research team identified a number of strategies that successful communities adopted to manage disasters. The overarching strategy was to adopt an enterprise – or whole-of-community – approach. This means integrating and unifying the efforts of all city, county, and state departments and offices – as well as local business and nonprofit partners.  While FEMA’s incident command system is good for the actual emergency response, having relationships in place in advance (as well as having conducted exercises together), and having a recovery structure after an event may be even more important to returning to normal.

Adopt a resiliency strategy to reduce the impact of disasters in advance. For example, a city administrator in Nebraska told the researchers: ‘Following the flood of 2011, we took advantage of FEMA mitigation funds to build berms around water and wastewater plants. After struggling to keep plants dry in 2011 flood, in the 2019 flood we simply raised the flood gate, turned on emergency pumping and had to do nothing else. Mitigation plan and project worked perfect.”

Develop a formal network of partners and engage the whole community.  Externally, local leaders must develop and grow a steady network of partners, horizontally and vertically to manage as successfully as possible through disaster. Horizontal partners would include community groups, private businesses, nonprofits, neighboring jurisdictions, and regional pacts. Most immediate support for disaster relief will come from a local government’s horizontal partners. Typically, this is done via mutual aid agreements to share services (such as fire trucks, debris removal equipment, and staff). In addition, local leaders have to attend to their vertical relationships – with their state and federal disaster response and recovery agencies.

According to the research team, most local governments (98 percent) responded in their ICMA survey that “they have at least one type of mutual aid agreement with nearby governments; these agreements regard public works, public safety, public transportation, social and human services, animal control, and/or payroll or financial services.” In addition, “half of local governments (50 percent) reported having established formal partnerships with local nonprofit organizations, community groups, and religious societies to support recovery and restoration activities in the event of a natural disaster.”

Develop informal relationships with government and nongovernmental partners. For example, one city administrator in Kansas said: “We have gotten good support from county officials, county emergency management and county public health. We all know each other. People go to church together and to the same grocery store. So, we expect more of that kind of relationship.”

have built neighbor to neighbor response teams.”  One city administrator in Kansas noted: “We have established strong relationships with civic groups and nonprofits. When we needed a place for people to shelter, between schools and churches, we had more space than we needed. The school superintendent said, ‘I have keys to every building.’ They fed people with their staff and their money. Knowing those resources are there helps lessen the budget burden.”

The research team also noted the importance of pre-disaster joint training exercises so the formal and informal networks have a clear understanding of their roles and responsibilities, and who they can rely upon.  There is no one, single approach that works – being ready for the unknown helps when you know where to turn for help before the state or federal responders arrive. After all, what are the chances of something going wrong?