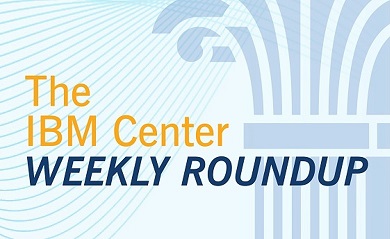 Friday, March 18, 2022
Michael J. Keegan
Highlighting articles and insights that we have found interesting for the week ending March 18, 2022

USDR Leaders Reflect on State of Government Digital Services. The United States Digital Response (USDR) group, which was formed as a volunteer response to the outbreak of the COVID-19 pandemic, is celebrating its second anniversary, as it continues to expand the scope and focus of its work. Gov Tech recently took the occasion to speak with USDR leadership — specifically USDR CEO Jessica Cole and Director of Public Digital Tina Walha — to discuss the group’s second anniversary, look at where the group is and where its work is going, as well as where it has been.

Senate passes $1.5T omnibus spending deal seeking state of the federal workforce updates. Congress, nearly halfway through the fiscal year, has passed a $1.5 trillion comprehensive spending deal for the rest of fiscal 2022. The Senate voted 68-31 Thursday night to pass a $1.5 trillion omnibus bill that will fund federal government agencies for the remainder of fiscal year 2022, following in the footsteps of the House, which passed the measure the previous evening. The bill now goes to President Biden’s desk. The House, in addition to the omnibus spending bill, also passed a short-term continuing resolution that funds the government through March 15. The current CR expires midnight Friday.

White House Unveils New Supply Chain Data Sharing Pilot. The White House announced forthcoming updates to the data flow behind the nation’s supply chains, in a bid to alleviate the strain felt by consumers since the onset of the COVID-19 pandemic. The Freight Logistics Optimization Works, aptly shortened to FLOW, looks to foster an information-sharing initiative between eighteen key players in industries like trucking, warehousing and logistics companies, as well as port operations. These stakeholders will develop a new proof-of-concept information exchange to mitigate supply chain disruption and congestion, while improving the flow of goods to consumers.

Data and the cyber workforce. The co-chairs of a congressionally mandated report on the cybersecurity workforce say that a new office or bureau should be charged with compiling more granular data on the state of cyber employment. The report called on the White House's Office for the National Cyber Director to take the lead of coordinating a multi-sector effort on the cybersecurity workforce. That's something the ONCD has since indicated it is looking to do.

In a reversal of roles, Congress tells the TMF to ‘show me the money’. Lawmakers zeroed out the TMF after the White House requested $500 million and the House, at one point, had allocated $50 million for IT modernization and cybersecurity improvements. Congress’ decision not to add more money to the TMF is both understandable, and shortsighted. In the year since Congress allocated $1 billion for the TMF, the board has made only eight awards to six agencies. Lawmakers are rightfully hesitant to add more money to the TMF at a time when there are hundreds or thousands of competing needs. On the other hand, the TMF Board is overwhelmed by demand.  And lawmakers need to recognize accelerating many of these modernization efforts will benefit their constituents so their support of the TMF is key.

Announcing Priority Area Leaders of the President's Management Agenda. OMB announces the leaders of each of the three PMA Priority Areas—who will serve as the key executives responsible for driving forward these three priorities across the Federal Government.

HHS CIO: Automation is Crucial to Zero Trust Architecture. Prompted by the White House executive order on cybersecurity, Federal agencies are accelerating their adoption of zero trust architectures. And according to Gerald Caron, chief information officer (CIO) and assistant inspector general (IG) for information technology at the Department of Health and Human Services (HHS), these models must include automation. During a virtual event hosted by FCW on March 16, Caron explained that zero trust security models require continuous real-time risk analysis of what is occurring in and around a network.

VA OIG Details Continued Deficiencies with VA’s EHRM. The Department of Veterans Affairs (VA) Office of the Inspector General (OIG) released a trio of reports today that found continued deficiencies with the VA’s Electronic Health Record (EHR) transition that has led to patient care issues in multiple areas. The VA’s EHR Modernization (EHRM) program has been under continued scrutiny for underperformance and delays, and the OIG’s reports find issues with the EHR ticket system, care coordination, and medication management system at the Mann-Grandstaff VA Medical Center in Spokane, Wash.

GAO’s 2022-2027 Goals Feature DoD, Federal Cyber Resilience. The Government Accountability Office (GAO) said its strategic plan for 2022-2027 features significant emphasis on cybersecurity issues including the government’s capabilities to boost cyber defenses against foreign government influence campaigns, and the Defense Department’s ability to meet cyber threats across multiple domains. In its newest plan, GAO outlines key efforts for 2022-2027; goals and objectives for serving Congress and the nation; and trends that are affecting government and society, while also detailing how technology plays a role in these efforts.

4 ways to bring more awareness to leadership. Leaders who develop "awareness intelligence" can be more present, perceptive and reflective, writes Dorothy Siminovitch, founder and president of Gestalt Coaching Works LLC. "Reflecting on what they most value, and practicing with ways to prioritize those values, offers leaders choices that have relevance, integrity and vitality," Siminovitch writes. SmartBrief/Leadership

The leader's role in explaining the big picture. Karin Hurt and David Dye offer advice for helping teams see the big picture beyond the daily tasks and projects. This mindset change will require time to think and the right resources, so leaders also have a responsibility to create those conditions. Let's Grow Leaders

Here's what you need before scheduling a meeting. Every meeting should have a purpose, goal and process before being scheduled, writes Scott Eblin. "As you design the process, consider factors like engagement, pace, facilitating productive conversation, gathering input, and, this above all, making a decision so you don't have to have yet another meeting," Eblin writes. Eblin Group

Next Week on The Business of Government Hour: A Conversation with Michael Brown, Director, Defense Innovation Unit. Broadcast Schedule: The show airs Monday at 11 a.m., and Friday at 1 p.m. on Federal News Network 1500AM WFED