Of Trees and Teleworking 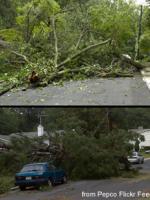 In the past couple of weeks, the DC metro area was wracked by massive storms that compounded commuting woes (and split an apartment building in half).  My commuting time more than doubled.  Much-maligned power company Pepco featured two Flickr feeds documenting the storm damage and indirectly making a strong case for teleworking.  In the days of VPN, it's easier than ever to work from home.

Thankfully, my workplace encourages teleworking, so at least once a week, I can skip the commute altogether and get right to work.  I have found that on teleworking days, I start work around the same time as I would normally start my commute, which means I eke out an extra half hour of work time in the same number of hours.  I'm not alone in noting that I'm more productive on days I telework.

There are many advantages to teleworking, for employers, employees, and the greater community.  But people who would like to participate in teleworking programs sometimes face stiff barriers.

The Web site Telework.gov holds itself out as "the official website of the Federal Government's telework program."  On the Telework Testimony page, the most recent entry is from 2007.  There are only five entries on the blog, all posted on January 4, 2010, the first at 12:00 PM, the last at 12:04 PM.   All of the pages' comments sections were closed in the same month.

The site, run by the Office of Personnel Management (OPM), pulls its content from both OPM and the General Services Administration (GSA).  It houses, among other documents, the last eight years' reports to congress on the state of federal teleworking.  The most recent is the 2009 report which, of course, details the state of teleworking in 2008.  In that year, according to the report:

Comparisons to Prior Year

There is also guidance and legislation helpful for feds who want to participate in teleworking programs.

The comments on the site's blog entries detail many of the barriers to teleworking that employees face.  In general, they comport with what the OPM details, though the frequency is different.  By my reading of the coments on multiple blog entries, the barrier mentioned most often is management resistance (either passive or active), with IT considerations coming in second, and office coverage/office culture mentioned third.

Another site, called Telework Exchange, supports federal employees (and their nongovernment counterparts) who are allowed to telework, and it calculates the savings they accrue, both in terms of environmental and economic impact.  The site calculates that their community of roughly 15,000 members saves a collective $19.5 million and removes 14,470.5 tons of pollutants per year.  When I put in my informaiton (driving a sedan about 9 miles to work, teleworking 2 days a week), I learn that I save:

Telework exchange also hosts a resource center for employees who are interetsed in teleworking, as well as managers who want to know the ins and outs of managing employees remotely.  The site caters not only to federal employees, but also to state and local government employees.  One of the reports they offer details the experience of "Telework Day" in Virginia.

Given the benefits of teleworking, and the advancing technology that is helping to make it easier both for employees and managers, the trend toward greater availability of teleworking options is likely to continue.