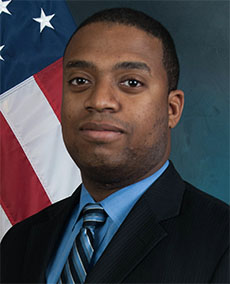 Tuesday, May 5, 2020
James-Christian Blockwood
The COVID-19 Pandemic has introduced a level of uncertainty and cross-sectoral impact of trends rarely seen before.....

My position in the U.S. Government Accountability Office (GAO), often called the “congressional watchdog,” affords me with a privileged, and rather sobering, view of the toughest, most complex national concerns. If we, as a nation, want to be best positioned to influence our future, it remains vital that we vigorously and rigorously explore trends and the environmental conditions that will shape government and society.

To this end, the U.S. Comptroller General and head of GAO, Gene L. Dodaro, proactively endeavors to ensure the U.S. Congress is aware of and prepared to address the most important issues we face. Under his leadership, I oversaw the development of GAO’s 2018-2023 Strategic Plan for Serving Congress and the Nation, and established the Center for Strategic Foresight, which serves as a principal hub to identify, monitor and analyze emerging issues facing policymakers.

This year marks the beginning of a new decade, and with an unexpected event of global proportion, has already presented unique opportunities to address the challenges of three familiar necessities—People, Money, and Science & Technology. These challenges, included in the National Academy of Public Administration (NAPA) Grand Challenges, are paramount to our nation’s success and will continue to drive public policy dialogue for decades to come.

The COVID-19 Pandemic has introduced a level of uncertainty and cross-sectoral impact of trends rarely seen before—aspects influencing daily life, national policy, and international relationships—and in a recent report on Prospects for the COVID-19 Pandemic, the Atlantic Council warns of increasingly stressed systems and infrastructure, global recession, weakened multilateral cooperation and growing nationalism.  These trends would only increase the need to address these three grand challenges for government

There is often disconcerting debate on the government’s need to hire different skill sets to meet future demands, yet it struggles to do so. Strategic Human Capital Management has been on GAO’s High Risk List since its introduction in 2001. Though the federal government possesses some of the most rewarding and important work in the job market and offers experience and benefits unlike any other institution, it has not fully capitalized on this competitive advantage and has not addressed attaining different skillsets required for the imminent changes to come.

Artificial Intelligence (AI) and modern technological advances, and now the burgeoning COVID-19 Pandemic, will unequivocally affect both skilled and unskilled workers. Globally, an estimated 375 million employees will need to switch occupational categories according to the Atlantic Council Global Risks 2035 Update, and specifically, data scientists are being hired across many different industries at an accelerated rate. The federal government will also have to consider the impact of changes in other industries, particularly the services sector, and disruption to the global economy in a post COVID-19 world.

GAO has long expressed concern over the fiscal health of the country. The U.S. continues to accumulate debt at an unprecedented and alarming rate. For fiscal year 2020, the Congressional Budget Office’s (CBO) early estimates indicate the federal budget deficit will be $3.7 trillion. CBO forecasts also show that Federal debt held by the public is projected to be 101 percent of gross domestic product by the end of the fiscal year—a statistic which takes into account the effects of pandemic-related legislation passed by Congress. A situation in which the debt grows faster than the economy is unsustainable. An unsustainable fiscal path will only worsen as we marshal necessary resources to stimulate the economy and combat the COVID-19 Pandemic. This does not change the fact that we will, in the relatively near future, have to develop and implement a plan to put the nation on a sustainable long-term path. This plan would need to consider policy changes to the entire range of federal activities, both revenues (including tax expenditure) and spending (entitlement programs, other mandatory spending, and discretionary spending).

“Do more with less” is a phrase we have come to know very well. Given fiscal trends, doing more with less will take on an entirely new meaning, particularly as leaders will be forced to make tough—and unpopular—decisions regarding some of the nation’s largest, most comprehensive and long-established federal programs, including defense, entitlements, education and healthcare. In 2013, Forbes noted the federal government was spending upwards of 90 cents for every dollar received solely on entitlement programs. This, in addition to paying interest on the federal debt, suggests we are borrowing virtually all of the money needed to “run and protect” the country. Though not much has changed since that publication, the federal government can ensure appropriate oversight and accountability of current spending and deepen the conversation on fiscal policy and the nation’s overall financial health.

As illustrated during the current pandemic, the future workforce will require different operating models and an enhanced digital, virtual and fluid environment. Normalized full-time teleworking and increased distance learning during the past couple months sufficiently highlights the need for the federal government to adopt an “out with the old and in with the new” mentality. Currently, over 75 percent of the more than $90 billion spent every year on Information Technology (IT) across the federal government is used to operate and maintain legacy systems. This practice exposes the federal government to continued soaring costs, intensifies cybersecurity vulnerabilities, and impairs interoperability and operational effectiveness. In some cases, government programs are relying on systems that are half a century old with no plans in place for modernization or replacement.

GAO’s Technology Assessment on Artificial Intelligence reports that AI poses both substantial promise and new risks. In addition to facing difficult inroads regarding technological solutions, government workers could also be buffeted by the effects of emerging trends in Artificial Intelligence. A 2019 report released by the Partnership for Public Service and IBM Center for the Business of Government assessing the impact of AI on the work of government revealed that AI is expected to revolutionize how government works, impact 130,000 federal employees, and require federal civilians to better understand AI algorithms, data and interpretation. Such revelations call for the federal government to improve tools at its disposal and increase workforce comfort and competence in using these tools.

Today’s world calls for greater quantum technology solutions and faster, more integrated and more virtual capabilities. Viewing computers, coding and technological infrastructure as a bridge to the future and lifeline to success is essential and will require investing in research and development and widely deploying IT solutions in order to become a more data-competent, data-driven government.

It is important to strengthen the federal government’s capacity to strategically plan for the future.

To begin, addressing these grand challenges—People, Money, and Science & Technology—and developing the flexibility to adapt in these areas is more crucial than ever, especially in the wake of the current global pandemic. Remaining committed to safeguard and ensure prosperity for future generations, it is paramount that government focus on: (1) hiring the right people and re-skilling to empower a future-oriented workforce; (2) considering fiscal policy changes and curbing current spending habits that have the potential to crush even the slightest progress made in government solvency, operations and service delivery; and (3) aggressively deploying and investing in science and technology to remain globally competitive and improve operational effectiveness.