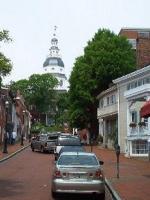 Tuesday, July 13, 2010
John Kamensky
The Senate Government Performance Taskforce held a field hearing on Performance-Stat systems in Annapolis, MD, with Governor Martin O'Malley as the lead witness. They explored how these systems might be applied in the federal government.

Senator Mark Warner took his taskforce to Annapolis to hear first hand from Governor O’Malley, as well as Montgomery County Executive Ike Leggett, and Baltimore deputy mayor Chris Thomascutty. They explained how they operated their performance systems and the kinds of results they’ve been able to achieve. But Senator Warner expressed interest in how their experiences might be adapted at the federal level.
Maryland State-Stat. Governor O’Malley described the evolution of Maryland’s State-Stat system over time and how it differs from Baltimore’s Citi-Stat which he launched a decade ago when he was mayor. Warner asked how this could be replicated at the federal level. O’Malley said a good starting point would be to use a common geographic information system (GIS) for mapping data, and use a common reporting format for running a Performance-Stat meeting: “You can’t run a railroad on 25 different gauges of track.” He also suggested starting with one federal agency or policy initiative and add new ones slowly, over time. O’Malley felt that much is going on to improve performance at the federal level but what was missing was “relentless follow through.”
Montgomery County-Stat. County Executive Leggett says his county tracks about 80 different projects or priorities via its County-Stat process. He offered several lessons learned, including the importance of having a central staff dedicated to managing performance and assisting agencies and tracking follow through. He also noted that it was important to separate the Stat process from the budget process, that it was important to have a “distinct performance monitoring process” focused on operational performance.
Baltimore Citi-Stat. Deputy Mayor Thomascutty testified that Citi-Stat helped flatten the learning curve of new, incoming executives so they could quickly see what the issues were that they faced. He said the Baltimore system evolved over the past decade from a focus on individual departments to a set of cross-cutting policy initiatives, which are being tied to an outcome-budgeting approach. He suggested that the federal government start with agencies that provide direct customer services with a clear line of authority and responsibilities. He also noted that they found that having the individuals involved in the process actually in the room together was important, that video-conferencing was not as effective.
Sen. Warner observed that whoever frames the questions or the performance measures has to get it right if the conversation in a Performance-Stat meeting is to be productive. A conversation on park cleanliness would be different that a conversation on having a “child ready to start school” because the influencing factors could be nutrition, housing, health, etc. Leggett says he involves program managers in helping frame the issues and measures since they are on the front lines.
Warner also noted that in each case, the chief executive was personally involved in standing up the various Performance-Stat systems, and invested substantial personal time and effort to initially get them operational. He did not suggest that President Obama would have to do so, if adopted at the federal level, but did note that Obama did designate a federal Chief Performance Officer.
Next step: will the Senate take up the House-passed amendments to the Government Performance and Results Act and include any of the lessons learned from this field hearing, or will OMB “just do it?”