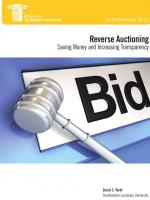 Specifically, Professor Wyld presents the following in this report:

While there is clear evidence of the value of reverse auctions, their use in government has still been somewhat limited. For this to change, Wyld recommends that departmental chief acquisition officers be assigned responsibility for taking the lead and making procurement savings and efficiencies a strategy priority for their organizations, with reverse auctions a central focus of that effort. Wyld recommends intensive staff training and change management initiatives as government implements new and innovative approaches to procurement. He also outlines a total of 14 recommendations for putting the power power of reverse auctioning to work for government organizations, their acquisition staff, and most important, for the American public.

We trust that this report will provide useful and helpful informa­tion to government managers at all levels as they move toward the increased use of reverse auctions.