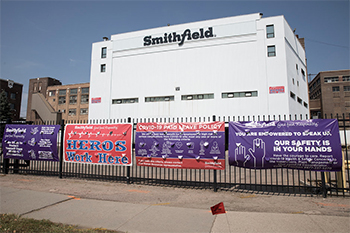 Tuesday, October 13, 2020
Donald F. Kettl
In strengthening government’s response to COVID-19, nothing matters unless it matters at the community level.

In the early days of the COVID-19 outbreak, there were hot spots in Seattle, Washington and Cook County Jail in Chicago. But, by the middle of April, the country’s biggest hot spot was a giant Smithfield Foods pork processing plant in Sioux Falls, S.D., an operation employing 3,700 people. Reports of cases began trickling in and then became a torrent. As the numbers began to spike, local health director Jill Franken, said, “okay, here we go.”

Just before the disease took off, there were just nine positive cases in all of South Dakota. Within a few weeks, the state had more than 3,500 cases, with the Sioux Falls plant linked to nearly 1,100 of them. The disease struck especially hard in communities of color. White residents comprised about 85 percent of the state’s residents but just 30 percent of the cases.

The rampant spread of the virus across the eastern part of the state hammers home a central but often forgotten point. We tend to see COVID and debate policies to control it from the top down. But it doesn’t work that way. We detect the disease and can only stop it from the bottom up, at the community level. No national policy will work unless it walks steadily on the ground.

The Reporting Picture.  Start first with the most basic step of measuring the outbreak. Much of what we know about the national numbers comes from the Johns Hopkins project, because the federal government does not have a coordinated national data repository to assess what’s happening. The Hopkins data comes from individual states and, in the states, the data come from local health departments and other reporting bodies, like Native American tribes and nursing homes.

Moreover, state reporting has been uneven. In South Dakota, for example, there is an extensive website but, as the Hopkins project points out, tracking in the state has sometimes been rocky because of changes in the strategy for reporting total test results. That makes it hard for communities to know where they stand—and for national planners to know what communities are doing.

To flip the issue on its head, suppose an individual isn’t feeling well, comes to a clinic or testing center, and tests positive. How community health officials find out about it, what they decide to do about it, and how that information rolls up into the broad national portrait of the disease varies tremendously across the country. The Hopkins tracking data for Texas, for example, shows a dozen shifts in tracking strategy since the outbreak of the disease.

Then there’s the question of what to do with the information that government officials collect. It’s a peculiar feature of America’s system of federalism that the feds have often been the ones in the media spotlight, but they have precious little role in shaping what happens at the community level. The simple fact is that the Centers for Disease Control and Prevention is largely a data-gathering and recommendation-producing organization. The National Institutes of Health conducts research and provides advice. The Food and Drug Administration is responsible for regulating the safety of treatments and vaccines, but what happens in local hospitals and clinics depends on the decisions of local—usually nongovernmental—health care providers and, of course, the supplies and equipment they can get their hands on.

How Data Shapes Intergovernmental Action.  By now, the frictions between the federal government and the governors have become very apparent. But in many states, the frictions between governors and their mayors may be as bad or even worse. Consider some of the most basic aspects of community life. Is it safe to eat at a restaurant, get a drink at a bar, worship at a church, or attend a wedding? Government responses for these aspects have typically been framed outside of local communities, by governors, and this has created enormous frictions across the country.

Some American state and local governments have clearly done a good job. After challenges during early stages of tackling the virus, New York Governor Andrew Cuomo has received generally high grades. There was relatively smooth cooperation between governors and local officials in New England, and those states beat back the first wave. In King County, Washington, where the US outbreak first appeared in Seattle nursing homes, the response was strong and aggressive. But other states have not fared nearly as well, including in Texas where there are tensions between Governor Greg Abbott and mayors in multiple major cities. Making it even harder to assess the issue is the fact that there is no easy-to-access map of who’s doing what.

There’s a fundamental paradox here: Those most responsible for dealing with the most immediate issues of COVID-19—at the community level—have had to work within the ground rules set by others. All of this has happened within uncertainty created by the nation’s peculiar strategy for collecting and interpreting the data about what’s happening.

There’s a very useful local government tracking system set up by Bloomberg Philanthropies in partnership with the National League of Cities. The system tracks local actions, but it also lays bare the underlying tensions of a system that has struggled to deal with the monumental consequences of a determined enemy.

All of these issues are about to become far sharper, when a vaccine is approved and distributed. Nothing will be more local than the process for determining who gets it first and what steps they have to take to get it. It’s not just that the logistical challenges of distributing the vaccine are enormous. Some of the vaccines require transportation and storage temperatures of -100 degrees F, and we simply don’t have a system in place for doing that at the scale that will be required to immunize 330 million Americans. The challenges of organizing and regulating access to the vaccine, including ensuring that the highest priority individuals get the vaccine first, will depend in large part on local officials.

New Zealand Provides a Model for Collaboration. These American issues stand in stark contrast to the experiences of other nations, which I will explore in a future blog post. For example, the New Zealand strategy poses a notable comparison, especially in its relationship between the central and local governments. That country’s public health system was likewise highly decentralized and, even in the best of times, the national government struggled to bring a concerted strategy to big local issues. But, despite the challenges, the country beat back the disease more effectively than almost any other in the world, with life now returning to something approaching normal and with new hot spots managed quickly.

The key element to New Zealand’s strategy was to react locally by creating a central, strong, small, agile, all-of-government team. Prime Minister Jacinda Ardern worked hard to forge a sense of community among all New Zealanders. She reinforced the efforts of first responders and told individuals working from home, “You may not be at work, but that doesn’t mean you don’t have a job.” She added, “Your job is to save lives, and you can do that by staying home.” The main strategy was communication from the top to reinforce action in communities.

New Zealand, of course, is a far smaller country than the U.S. It’s also a collection of islands with broad oceans as buffers. The system of government is fundamentally simpler, with just one house of the national legislature. But that nation’s strategy is one echoed by European governments like Paris, Barcelona, and Tallinn, that have used the tools of collaboration, innovation, inclusiveness, and data, even though the virus incidence may increase yet again.

This basic strategy—working centrally to drive results locally—has proven the most effective in the world to creating resilient communities fighting off COVID-19.