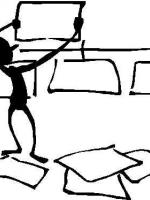 Wednesday, January 26, 2011
President Obama committed to reorganizing the government during his State of the Union address. He pointed to examples of how government agencies duplicate and overlap each other in their programs, and how this needs to be fixed. He also noted that it has

And he’s right.  The last major reorganization was spawned by the 1949 Hoover Commission.  And Alan Dean, the last surviving staffer from that commission, died in December.

Since 1949, many new agencies have been created -- NASA, EPA, HUD, DOT, DOE, Education being some.  Most recently, the Department of Homeland Security and the Office of the Director of National Intelligence were added to the list.  Most of these were not created from scratch but rather were the result of massive reorganizations.    Rarely has the government created new agencies – like the Transportation Security Administration or the new Consumer Financial Protection Agency.

The last major attempts at reorganization were in the 1970s, under Nixon (who proposed reorganizing the government into four “super departments”) and Carter (who created both the Departments of Energy and Education).  In the 1980s, Congress stripped the President of his authority to reorganize executive agencies.

In his State of the Union address, President Obama declared:  “In the coming months, my administration will develop a proposal to merge, consolidate, and reorganize the federal government in a way that best serves the goal of a more competitive America. I will submit that proposal to Congress for a vote – and we will push to get it passed.”

Should we reorganize the government to be more coherent and effective?  Yes.  Senator Tom Coburn has led the charge.  In 2009, he sponsored legislation mandating GAO to submit a report (due to be released in coming days) to assess the fragmentation and overlap in government programs.

Is it worth the effort?  Maybe.  Congress needs to play an active role and reorganize itself, if any executive branch reorganization is to be successful.  In a number of agency reorganizations, such as EPA and DHS, these agencies were created but Congress did not reallocate its own committees’ jurisdictions of the pre-existing programs to a smaller number of committees. As a result, there is now a single EPA and a single Department of Homeland Security, but each reports to over 70 committees and subcommittees, with appropriations coming from multiple appropriations bills.

This fragmentation of congressional jurisdiction, funding, and oversight contributes to dysfunctional behavior by these agencies in the executive branch.  For example, the US Agency for International Development at one point had 15 different mission priorities set in law, by different congressional committees.  In some cases, they were diametrically opposed (e.g., increase exports of US-grown wheat vs. increase recipient countries’ self-sufficiency in growing food).

Reorganization, in absence of a crisis (think Homeland Security, TSA, and the reorganization of the intelligence community as a result of 9/11) is very difficult.  For example, Senator Richard Durbin has led a fight for more than a decade to integrate the 16 food safety agencies and the recently passed Food Safety Act didn’t do it.  In fact, when Vice President Al Gore undertook the National Performance Review, one of his directions to the team was to not propose reorganizing the government.  He felt this was fruitless exercise and charge his team, instead, with “fixing what’s inside the boxes, don’t spend your time trying to move them.”

This hasn’t deterred us from writing about it, though!  The IBM Center has a sponsored several very helpful reports that may provide useful lessons and insights:

Absent congressional reorganization, is it worth it?  Again, that may depend, but one possible approach might be to not take the traditional “moving the boxes” approach.  With the rise of the internet, social media networks, and the new GPRA Modernization Act, it may be possible to create “virtual organizations” around specific goals, with designated “goal leaders” as envisioned in the law.  This would not clean up the messy government organization chart, but it could create better focus on results Americans care about.