Reinventing the Grant System to Be More Outcome-Focused 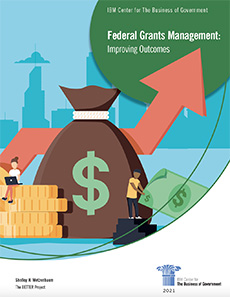 Tuesday, April 20, 2021
John Kamensky
Is it time to reinvent the roles of the many players in the federal grants management system?

“A new survey [of federal grant managers] shows that administrative costs have spiked, while funding agencies struggle to measure outcomes. . . .. It isn’t surprising that measuring recipient outcomes is challenging. Grant managers are accustomed to measuring and reporting funding flows and uses, timeliness, and compliance. But data about quality, customer satisfaction and mission impact are harder to define. . . “

Background. The federal grant system is vast. In fiscal year 2019, a pre-pandemic year, the federal government spent $765 billion on grants to states, localities, research institutions, non-profits, and others. This is greater than the entire Defense Department’s budget! Furthermore, federal grant spending surged to $921 billion last year in response to the COVID-19 pandemic.

As Myers noted in his article, most of the attention given to federal grants management has been devoted to the tasks of awarding and distributing grant funds and, after they have been awarded, to tracking grant spending.  Until fairly recently, surprisingly little attention has been given to tracking program outcomes, or more importantly, in trying to improve those outcomes.

The Office of Management and Budget has been the leader in promoting results-oriented grants. Last year, it led a task force that published a Grants Playbook that calls for “a paradigm shift in grants management from one heavy on compliance to a more balanced approach that includes establishing measurable program and project goals and analyzing data to improve results.” This shift involves changing roles and responsibilities across the grants system.

Reinventing Roles in the Grant Management System. In a new report for the IBM Center, Federal Grants Management:  Improving Outcomes, Dr. Shelley Metzenbaum argues that in order to shift from an emphasis on administrative matters to an emphasis on improving outcomes requires rethinking the roles and responsibilities of the many diffuse and dispersed players in the federal grant system.  This recommendation would come as a change to the current grants management system, in which a wide range of players are currently involved at various points in the life cycle of a grant program. These people, in and outside the grant program and government, may influence both what grant program objectives are or the rate and magnitude of progress on those objectives. Their roles and responsibilities tend to be diffuse and, unfortunately, it is currently far easier to identify those working on grant fiscal, audit, and oversight matters than those working on improving program outcomes.

New Role 1: Designate Outcome Brokers. A 2014 Government Accountability Office report on the successful implementation of the 2009 Recovery Act observed that:

“Officials in the Recovery Implementation Office employed a collaborative, facilitative approach, while also leveraging the authority of the Vice President to facilitate the participation of stakeholders. The office functioned as a convener and problem-solver that engaged with a wide range of federal, state and local partners. . . .  Toward this end, the office adopted the role of an “outcome broker,” working closely with partners across organizational silos at all levels of government in order to foster implementation of the Recovery Act and achieve results.”

This role was embedded in the 2010 revisions to the Government Performance and Results Act but was dubbed “goal leader” for agency and cross-agency priority goals, not “outcome broker,” but the roles would be essentially the same.

The outcome broker would be responsible for bringing together goal allies and those with relevant expertise and resources to make progress towards the grant program’s outcome objectives. In some cases, the outcome broker might lead an outcome improvement team for the program or for broader strategic objectives.  His or her role would be to work with grant program managers to:

New Role 2:  Grant Managers’ Role Reinvented to Become Problem Solvers.  The role of grant program managers would be reframed to shift emphasis to improve outcomes.  This would require adopting a problem-solving mindset (with the support of an outcome broker) and would include:

Can these responsibilities be added to grant managers’ existing responsibilities? Some might suggest that the increase in robotic process automation to perform routine administrative tasks holds promise for reinventing the role of program managers so they can shed the administrative routines in order to place greater emphasis on creative, problem-solving tasks.

New Role 3:  Continuous Learning and Improvement Communities Are Created. One way to develop a problem-solving mindset and culture among those in the grant management world is to proactively enlist the insights and help of those affected by a grant program to understand what works and what needs improvement. Rather than relying on a top-down “problem finding and punishment” approach, grant program leaders should develop a bottom-up learning and problem-solving approach.

Learning and improvement communities already existing in some grant programs. These communities – largely voluntary -- bring practitioners and researchers together to build and use evidence to make progress on a grant program’s outcome objectives. For example, some are:

These different models provide grants program officials alternative ways of creating communities for their own grantee and stakeholder networks that would work best for them.

Is Role Reinvention Realistic? As described above, there are existing examples of each of these three different roles proposed by Metzenbaum.  But how might they be scaled more broadly across the grants management system?  Is it realistic to advocate such a change?

Interestingly, there is a pending opportunity that could be used to scale these examples.  A recent law mandates the creation of an inventory of all federal programs – including grants. One of the elements of this inventory mandate is that all “Federal financial assistance awards” (the formal name for grant programs) must annually report “results” to the extent practicable, based on data reported to the grant program office.  OMB has undertaken a pilot effort to determine how best to develop the inventory. To date, the pilot has developed a methodology to identify categories of similar programs. To date, OMB has defined 12 categories and 34 agencies have reported about 700 programs and “sets of activities” (sub-sets of programs) that fall into these 12 categories.  The 12 were selected because there has been some historical common understanding about them – such as programs and activities related to homelessness, broadband, workforce development, etc.

If categories such as these are ultimately used as an organizing construct, they might evolve into a set of portfolios of outcomes – related grants, programs, and activities that support a common outcome-oriented goal. And this is where an Outcome Broker – with the support of problem solvers and learning communities -- might well become the focal point for ensuring such a portfolio of programs makes progress towards intended outcomes.

Where to start?  Half of all federal grant dollars are devoted to supporting health care programs, largely Medicaid.  This might be a good starting point. There is a movement to address the social determinants of health, factors that are not directly health-related but contribute to poor health outcomes, such as economic instability, lack access to quality education, and unsafe workplaces and communities. These and other health-related factors are tracked by a network of health and social professionals inside and outside government via the federal Healthy People initiative.

Healthy People is a set of “science-based, 10-year national objectives for improving the health of all Americans.”  Begun in the 1980s, it sets benchmarks and monitors progress over time of more than 60 health-related strategic objectives, grouped into five broad topical areas.  Each objective is broken into sub-objectives that are linked to evidence and show trend information for each health objective and leading health indicator. When states develop their own health improvement plans, the site links to that state’s plans.

While the HealthyPeople.gov website does not currently link back to the various supporting federal grant programs, it could serve as a model of how grant program leaders could organize problem-solving efforts and communicate outcome-focused goals and relevant evidence. It could also serve as a natural starting point for designating outcome brokers and developing continuous learning and improvement communities.