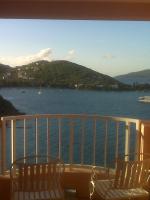 Wednesday, December 8, 2010
I just came back from a brief exotic trip to the U.S. Virgin Islands where the government is serious about making itself more efficient and effective. I was asked to describe how the U.S. reinvention effort of the 1990s was run, and how state governments

I left DC at a chilly 25 degrees a couple days ago and arrived in a place with a temperature of 77 degrees with flowers, sunshine, and palm trees.  While only on the ground less than 48 hours, it was a treat!  I’d never been there before and found quickly that the islanders live in a hilly place, with narrow, windy roads and drive on the left (like the British).  And the streets don’t have names or addresses! Fortunately, I didn’t rent a car!

The meeting was a rare summit of the Islands’ executive, legislative, and judicial branches.  The heads of each were there to kick off the summit, comprised of over 200 agency heads and senior leaders.

The U.S. Virgin Islands is a territory with a population of about 120,000 on three islands.  The government is the largest employer, with over 9,000 employees spread across two dozen agencies reporting to the governor and an additional dozen semi-autonomous agencies.  With fiscal gaps similar to most state governments, recently re-elected Governor John DeJongh and his colleagues face serious challenges requiring all parts of the government to come together to solve.

In his kickoff of the summit, the governor was clearly committed to the critical role of technology in improving government operations, but in talking with some of his senior agency heads, the government seems to face many of the non-technology challenges I saw in the federal government in the early 1990s.  Some of the stories I heard reminded me of the silliness of the federal government pre-reinvention – just with updated technology!  For example, one deputy agency head told me she has an advanced Blackberry – with a sliding keyboard and touch screen – but can only use it to make calls.  Everything else is blocked.  She can only access email via her desk-bound computer.  Another agency leader described how one agency converted a carbon form with 8 pages to an electronic form, only to find the staff printed out the 8 pages and inserted carbon paper so the agency head could sign the original with carbon copies.  And these were stories about what the bureaucracy did to itself.  There were more entertaining stories about what citizens had to endure!

So I found it refreshing to recap the stories of reinvention and how they could apply reinvention efforts in their agencies.  After sharing with them some of my war stories of how Vice President Gore organized and ran the reinvention efforts in the 1990s, the assembled group broke out into work groups to identify problems they thought needed to be addressed.  I then provided them an overview of some of the tools and techniques they could use to address these identified problems, such as Lean Six Sigma, performance contracts, and awards programs.  The groups then developed quick action plans on how they would address the various identified problems and who needed to act.  It wasn’t surprising that the participants thought the three most urgent priorities were improving customer service, fixing broken processes (like procurement), and employee development!  Interestingly, the three are interrelated.

In addition to the presentations, I promised to pull together a set of resources – articles, books, and (of course) IBM Center reports – that they would find useful as they continued their redesign efforts.

Hopefully, the U.S. Virgin Islands will shortly join the list of states with active redesign efforts underway.  With the enthusiasm and commitment I saw among the summit participants to fix their government, I’m sure they will have lots of success stories to share in the near future!