Recovering from the Recovery Act - Part 2 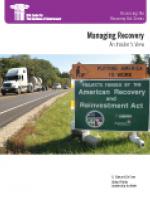 While he does not mention it in his report, probably the highlight of his experience may not have been meetings with the President and the Cabinet, but rather his being mocked by Stephen Colbert on his late night TV comedy show, as G. Edward “Deceive!”

Background.  The American Recovery and Reinvestment Act of 2009 (Recovery Act) was passed in February 2009, providing $787 billion of tax benefits; grants, loans, and contracts; and entitlements in more than 250 appropriation accounts across more than 25 federal agencies and 65 programs.

President Obama assigned the overall management responsibility for the program to Vice President Biden, who acted swiftly to create a management structure that relied on innovative processes and technologies.  DeSeve, served as the Implementation Coordinator on Biden’s behalf with three titles: Special Advisor to the President for Recovery Implementation, Assistant to the Vice President, and Senior Advisor to the Director of the Office of Management and Budget.

Looking Back:  Lessons Learned.  Reflecting on his experience in that role, DeSeve identifies seven primary lessons from the implementation of the Recovery Act:

•    Attention from the top matters. There is no substitute for the president and the vice president being fully engaged.

•    Transparency minimizes fraud. Having many sets of eyes and ears, including the public’s, committed to avoiding problems pays dividends if properly organized.

•    Financial information can be transmitted in an almost-real-time environment. Having weekly financial data and quarterly recipient data made course corrections possible and constant reporting required both agencies and recipients to exercise greater care about the data.

•    New technology enables direct reporting. The use of existing successful technology-based reporting models and the Internet can make data transmission faster and more reliable, minimizing the need for intermediaries.

•    Geospatial mapping makes data more understandable. The availability to the public of data that they could relate to their own neighborhoods was an extremely powerful tool in promoting program acceptance.

•    Collaboration through networks was essential. Using clear principles, a series of networks was developed that aligned incentives and accountability in a way that promoted rapid and effective performance.

•    The Recovery Act provides a template for agency planning in the future. As the GPRA Modernization Act of 2010 is implemented, agencies should be looking to the lessons of the Recovery Act for guidance.

Then, in a particularly intriguing epilogue to his report, DeSeve suggests how government leaders can address future major challenges on the scale of the Y2K crisis, Hurricane Katrina, or the SARS epi­demic. DeSeve offers guiding principles for how to successfully meet future challenges when acting on big problems . . . because we will face them again!

Looking Forward:  Lessons in Creating and Using “Managed Networks.”   Managing complex  problems requires a new approach based on an integrated system of relationships that reach across both formal and informal organizational boundaries. The approach used to implement the Recovery Act—the use of managed networks—reflects some of the guiding principles for how to successfully meet future challenges when acting on big problems. Some of the major lessons learned were:

Related Posts in this series include:

Part 1: Recovering from the Recovery Act: The Story from the Bottom: Cities’ Experiences

Part 5: Recovering from the Recovery Act: How States Reported on Use of Funds