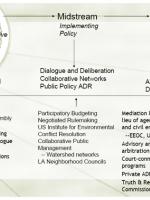 Friday, April 9, 2010
. . . Both the White House and the Open Government advocacy groups plan to assess them. No good deed goes unnoticed! The White House says it will evaluate them by May 1st (this implies that OMB posted the agency plans before it reviewed them – this...

. . . Both the White House and the Open Government advocacy groups plan to assess them. No good deed goes unnoticed!

The White House says it will evaluate them by May 1st (this implies that OMB posted the agency plans before it reviewed them – this is a huge change!). The Open Government advocacy groups are inviting others to volunteer to help assess agencies’ plans, based on a set of criteria they’ve developed. This is somewhat reminiscent of the scoring of agency Annual Performance Reports under the Government Performance and Results Act by the Mercatus Center, but in this case, it’s more open!

Yesterday, White House staffer Beth Noveck, who has been shepparding the Open Government initiative, wrote a blog entry summarizing some of the highlights she’s read so far. Her summary is worth reading. For example, the list of “flagship initiatives” is exciting. HUD is developing a predictive tool to determine where homelessness may increase, in an effort to forestall it. And the Department of Health and Human Services is developing a dashboard to allow users to track and graphic Medicare spending on different key services, by large hospitals.

I’ve largely missed much of this hoopla because I’ve been attending conferences on the West Coast. But the topic of Open Government is on the front burner, even there!

Yesterday, I participated in a panel sponsored by the American Bar Association in San Francisco. I summarized what’s been going on in Washington regarding the Open Government efforts, but I learned a lot from what’s going on in the field.

Another Potential Assessment Framework. I was particularly enlightened by a description of how to think about citizen involvement at different stages in the “life cycle” of a policy issue. Prof. Lisa Bingham, from Indiana University, offered a scholarly model that might serve as a useful assessment tool for agency Open Government Plans, as well as legislative reforms in the future.

Prof. Bingham looked at citizen involvement as described in administrative law and rules and outlined a three-part framework:

Upstream Involvement. Here, citizens can be engaged in the development of a policy through dialogue and deliberation. This would include both the legislative and the quasi-legislative elements of policymaking. Examples include the use of tools such as Deliberative Polling, Citizen Assemblies, and Study Circles. The objective is to gain informed citizen input before a proposal is completely formed.

Midstream Involvement. This is the stage where a policy is being implemented. This would include tools such as negotiated rulemaking, participatory budgeting, and watershed networks. The objective at this stage is to involve citizens in helping define and prioritize how a policy should be implemented. An example in the recently-passed health care bill is citizen involvement in developing a national strategy for health care quality.

Downstream Involvement. This is the stage where policies are being enforced through judicial or quasi-judicial means. The tools would include alternative dispute resolution, mediation, and facilitation. The objective is to avoid the “win-lose” scenarios that would be imposed through agency adjudication or court action.

Prof. Bingham is concerned that the existing federal legal framework deals with these elements in a piecemeal fashion and encouraged consideration of a “Collaborative Governance Act” that would update laws, such as the 1947 Administrative Procedures Act, which did not foresee the existence of the internet and its impact on how government and citizens interact today. OMB did offer some new, more liberal, interpretations of some of these statutes in memos released in recent days, but Prof. Bingham thinks that legislation may be needed to reach much further.