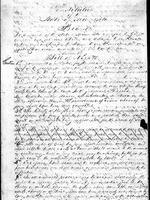 Wednesday, October 3, 2012
Gadi Ben-Yehuda
In this section of the Center's 'Next Four Years' series, we examine the role social media will play in citizen participation.

Americans, even before they were Americans, have always practiced participatory government.  In fact, one of the most famous documents that serves as an example of citizens participating in their governance was written and signed before its authors even set foot on Western soil: The Mayflower Compact.

America’s continuing story, now in its third century, can be seen as the deepening and broadening of the right to participate in civic life.  That story beings in the 17thcentury with hand-written compacts, moves through the 18th and 19th century as the Founders write the national Constitution and states join the union, each writing its own founding document, continues in the 20th century through nail-bitingly close Constitutional Amendments that enfranchise more citizens, and culminating in the 21st century with government Web sites through which citizens can comment on pending rules, or private companies that allow citizens to send legislators structured data on how they feel about specific bills.

In the chapter that is the next four years, Americans should see participation that is increasingly more widespread, actionable, open, valued, and encouraged.  And federal agencies can take specific, concrete steps to ensure that change takes place.

What this means for all US residents is that the barriers to participation in their government will come down, as a culture of engagement replaces the insularity that often defined public service.  The Open Government Directive of 2009, while important, has been overtaken by the events in the three years between its signing and the upcoming election, and whomever wins, he will face an electorate that demands to be heard and a bureaucracy that has already taken the initial steps to listen.

The Web site GovSM.com lists more than two hundred federal agencies, departments, and offices with links to their social media accounts, including Facebook, Twitter, Flickr, YouTube, and others.  Through many of these accounts, people can not only read what people in each of these organizations are doing, they can leave comments and start conversations with other people—both from within and beyond the organizations—who are similarly interested in their issues.

In the next four years, not only will Americans see more agencies activate accounts on existing social media sites, but it is likely that (a) new sites will launch that better serve the interests of participating in government—more on this below—and (b) more government offices will establish online outposts and staff them adequately to take advantage of citizen participation.

What agencies can do: Establish accounts in relevant social media sites and communicate agency activities and objectives; monitor social media for feedback and, where possible and appropriate, incorporate collaboration tools.  Entrust as many employees as possible with social media access, the better to monitor incoming communications from those channels.

People already want to help agencies with many of their mission-critical tasks.  Private enterprises and private citizens alike, for example, want to build robots that are capable of performing civic tasks.  Both people and organizations want to help maintain the roads that they travel on a daily basis.  And there is no shortage of individuals, companies, and trade associations who want to see their interests reflected in the rules that govern federal agencies and federal procedures.

The next four years, therefore, is very likely to see an increase not only in conversations, but in actionable information permeating from every sector of society into the public sector.  Sites like Regulations.gov and PopVox, tools like SeeClickFix and Open311 are only the beginnings of action-oriented participation.

What agencies can do: Weave citizen-outreach activities into as many programs as possible, and promote your outreach efforts on relevant social media platforms.  Where permissible, use ideation platforms and other tools to gather citizens’ ideas and let them comment on others’ ideas.  As an example, the White House’s We the People tool is open source, and can be used by agencies for their own purposes.

The move to more open government—meaning that people both within and outside an agency will be able to see who is developing, discussing, deciding, or implementing policies and programs, and to see the impact of their contributions—will be driven by two powerful engines.

The first is by the volunteers themselves.  Two strong motivators that open government taps into are the desire for recognition and meaning.  By showing who is participating in mission-critical activities, agencies recognize volunteers and organizations.  By allowing those volunteers and organizations to track their contributions and see how they affect policies and programs, agencies demonstrate the meaningfulness of their contributions.

The second engine is the agencies themselves, for a few cogent reasons.  Primarily, agencies may be required to show who has helped to determine their policies and who is responsible for their programs’ performance.  Additionally, agencies may find experts on policy or implementation whom they want to engage proactively, and they will be able to do so only if their records are open.

What agencies can do: Use as much open source material as possible; put as much data in the public sphere as possible; use open ticket-trackers for service requests; where permissible, livestream meetings and hearings and put recordings on a specific portion of the agency Web site.

While recognition and meaning are powerful motivational forces, rewards—both monetary and non-monetary—are also effective.  Already, there is no shortage of contests and awards, for example, the SAVE, the Sammies, and HHSinnovates awards are only three example of prizes for federal employees.  In the next four years, some government agencies are very likely to replicate these types of programs for volunteering individuals or organizations.

What agencies can do: Conduct online chats—through Twitter, for example, or Skype—with people or organizations who participate in agency activities.  Allow communities that coalesce around agency issues, on Facebook, for example, to nominate individuals or organizations for awards that the agency offers, and allow senior management to bestow awards on winners.

All four of the previous trends, if they come to pass, will culminate in the fifth: more encouraged participation.  In 2008, when many of the agencies’ digital participation efforts launched, it may have been enough simply to initiate a program, inform a few media outlets, blogs, and Web sites, and wait for people to join a conversation or sign up for a program.  Today, however, failing to design and implement comprehensive outreach is a recipe for failure.  Part of the story of the next four years will certainly be federal agencies joining both mainstream and niche social media sites and engaging bloggers as well as traditional media outlets to promote their participation programs and showcase their successes.

What agencies can do: Identify important voices beyond the agency’s walls—influential bloggers, highly active social media presences, on- and off-line community leaders—and include them in discussions of agency tasks in which they have previously shown an interest.  Find NGO organizations or CSR programs that work on agency goals and invite them to participate in relevant activities.  In short, institutionalize liaising with individuals and organizations outside government.

Participation in an age of social media

Social media are not new, but they are renewing many Americans’ desire and ability to participate in their own governance.  The tools for people to share their thoughts, to share their work, to collaborate both online and off are no longer exotic and no longer constrained by tethered or spotty access to the internet.  In the pockets of more than half of all US citizens are devices that not only connect to social media all the time, but have sophisticated sensors in them, allowing their holders to generate and capture all sorts of data that can be shared with the government or other citizens.

The next chapter in American history will be written in no small part by that vast body politic comprised of the multitudes who have the means to participate, who have been incentives to participate, and whose participation is actively sought.

The Next Four Years: Intelligence Community Reform Refining not Rebooting