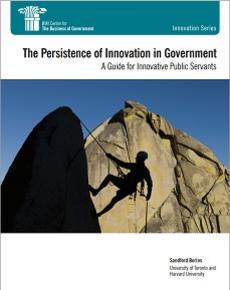 Wednesday, April 2, 2014
Gadi Ben-Yehuda
A new report offers guidance to government executives and innovators and finds that they are already changing how agencies operate and deliver services.

Released by the IBM Center for the Business of Government, “The Persistence of Innovation in Government: A Guide for Innovative Public Servants,” mines data from the 28-year history of the Harvard University’s Kennedy School’s Innovations in American Government Awards (HKS Awards). The report author, University of Toronto Professor Dr. Sandy Borins, seeks to discern how government agencies have found ways to introduce innovations in the face of the obstacles inherent in the process: the risk of failure, and necessity of devoting extra time, energy, persuasion, and improvisation required to bring an innovation to fruition.

Dr. Borins finds that innovation is alive and well in government. He illustrates in the report how traditionally hierarchical government agencies can initiate and embrace change, and identifies ways that innovators can succeed within their organizations.

While “innovation” rarely appears in the title or job description of a public servant, Dr. Borins finds that many feel the urge to innovate—born of a belief in government as a solution, a belief that government can find better ways to deliver services. The report also finds that innovators are more likely to be strategic planners than adaptive incrementalists. They face bureaucratic resistance, external opposition, and funding shortfalls – and frequently must overcome obstacles through persuasion, accommodation, and persistence. Further, innovations originate at all organizational levels and often result from proactive problem solving.

Data from the HKS Awards reveal that, over the past 20 years:

And for government executives:

The report concludes by emphasizing the importance of partnerships among awards programs, academics, and practitioners as key to spurring future innovations. Moreover, it calls for continued research on innovation in government.

Professor Borins argues that it is crucial to understand trends in innovation more deeply and to identify jurisdictions or organizations that support and encourage multiple innovations over time.