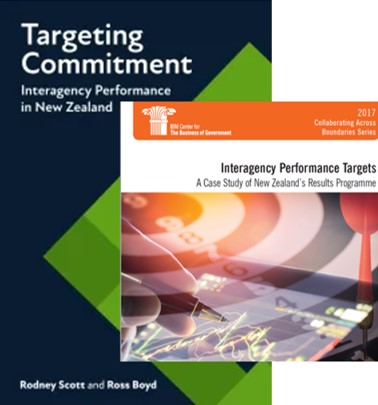 New Zealand has long been considered at the forefront of public administration, experimenting with new ways of organizing and delivering public services. In 2017, guided by our mission to connect public management research to practice, the IBM Center published a very timely and insightful report, Interagency Performance Targets: A Case Study of New Zealand’s Better Public Services Results Programme, by Rodney Scott and Ross Boyd.

From 2012 to 2017, as part of a reform package called Better Public Services, the government of New Zealand challenged the public service to organize itself around achieving just ten results that had proven resistant to previous interventions. As the authors admit, the plan was deceptively simple: set ambitious targets and publicly report on progress every six months; hold small groups of public managers collectively responsible; use lead indicators; and learn from both success and failure.

In their IBM report, Rodney and Ross, who were on the ground in New Zealand helping the government assess the progress of this five-year-old reform initiative, describe the approach, framework, and results of the initiative. They also offered “practice insights” that can be helpful to other governments pursuing similar objectives.

Their report was so well received that the authors extended it into a 320-page book released in early 2022. The book is called Targeting Commitment: Interagency Performance in New Zealand, published by the Brookings Institution (as part of the Harvard Ash Centre series), and features a foreword by the former New Zealand Prime Minister, Sir Bill English, who underscores the purpose of this scholarship: ”policy makers need to understand more than ever what they want to achieve, whether they are achieving it and how to organize themselves to sustain success.”

Using case studies based on the experience of people involved in the change, together with public management research, the book illustrates how ambitious targets and public accountability were used as levers to overcome the bureaucratic barriers that impeded public service delivery, and how data, evidence, and innovation were used to change practice. New Zealand experimented, failed, succeeded, and learned from the experience over five years. This New Zealand experience demonstrates that interagency performance targets are a potentially powerful tool for fostering better public services and thus improving social outcomes.

As the authors note, most research has focused on how to make collaboration easier by reducing these transaction costs. This new book looks at how and why some collaboration succeeds even in situations when collaboration is hard – why it is that sometimes public servants remain committed to succeeding despite the odds. It explores how and why the New Zealand government made progress and how the program sustained the commitment of public servants and unleash the creativity of public entrepreneurs.

According to Ross and Boyd, goal commitment, which refers to the volitional bond between an employee and the achievement of an outcome, plays an integral role in these successes. Public servants noted in the book demonstrated strong goal commitment to achieving a target and persisted in striving toward that target over five years. Here are some core features that seemed to support goal commitment:

Their insights continue to have broader applicability for government leaders in other countries, as well, especially when they find themselves facing persistent social problems that require cross-agency collaboration to make progress.

Congratulations to Rodney Scott and Ross Boyd on the release of Targeting Commitment: Interagency Performance in New Zealand. This is an opportune time to reflect on how best to move forward in achieving cross-agency results. No doubt, much like their IBM Center report, this book will both inspire and provide guideposts for government leaders across the world.

Get your copy at: https://www.brookings.edu/book/targeting-commitment/

Interview with Rodney Scott on The Business of Government Hour