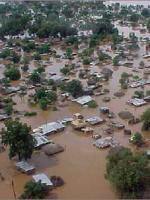 The panel and speakers that really intrigued me focused on a topic I normally don’t follow --  disaster management and recovery.  But there were also a series of top speakers who reinforced things I’d already been aware of, regarding the fiscal situation in Washington.  Following are some quotes I jotted down:

The conference also featured a panel of experts that explored innovations in public and private sector coalitions.  This is an area where the partners are rethinking how to provide disaster management and recovery services with less government support.  It turns out this is an amazing example of the power of collaborative networks.

Non-Profit Networks.  I had no idea that a non-profit electronic supply chain network has been created to coordinate a “national donations management network” that responds to disasters and other urgent local needs such as food banks.  This organization, AidMatrix, links corporations such as the Oscar-Meyer food company, non-profits such as the Red Cross, and government agencies such as FEMA.  The electronic network allows all its partners a view into what is in the supply warehouses around the world in order to get “the right aid to the right people at the right time.”

AidMatrix president Scott McCallum, former governor of Wisconsin, said that the network not only wants to coordinate the distribution of needed supplies in disaster zones, such as Haiti, but also prevent a “secondary disaster” of sending the wrong people or supplies to a disaster area, such as the donation of a hospital to Haiti after the earthquake – but without a place to set it up, or doctors, or supplies, etc.  He also cited the intercepted delivery of a shipload of teddy bears!

He says the AidMatrix network provides visibility into what supplies are available and where they are needed by a groups that have been pre-vetted to participate.   For example, he said that if Oscar Meyer had a damaged (but still usable) shipment of hot dogs, this would be logged into the network and food banks could “bid” for the shipment through a system of free chits distributed among 200 different food banks across the country, and delivery could be arranged via a network of 8,000 transport truck companies who would move the shipment when empty trucks are “dead heading” back to their home base.

For-Profit Networks.  Another organization, the for-profit Service Master Clean Corporation, provides recovery services (after the rescue phase of a disaster is over), largely in the Wisconsin area.  Service Master’s president, Mark Cyganiak, says they provide not only the ubiquitous blue tarps but clean-up services for hospitals, churches, utilities, and other facilities to get communities back on their feet after a flood, tornado, or other disaster.  Service Master has a network of pre-vetted recovery workers and supply centers so they can move quickly into a disaster zone with a pre-agreed upon set of rules of engagement for contractors.  Service Master also maintains a consolidated list of procurement items with pre-set prices, so communities do not have to separately negotiate contracts.

These two organizations – one non-profit and the other for-profit – are great examples of how networks can be pre-positioned for action before an incident.  I’ve seen similar networks, such as the All Hazards Consortium here on the East Coast, but that seems to be largely a response planning network of people rather than a recovery network of things.

How these kinds of networks evolve in other policy arenas -- such as healthcare, social services, and the environment -- will be interesting to watch, especially as they adapt to the use of social media.