The Mindsets of Innovators in Government 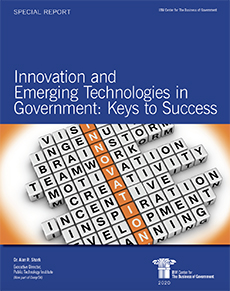 Wednesday, July 22, 2020
John Kamensky
There is a governmentwide strategic push to support the development and use of emerging technologies – such as artificial intelligence, blockchain, and hybrid computing.

Technology innovation is happening via cross-agency communities of practice and incubation hubs supported by the federal chief information officer and the General Services Administration.

Innovation Happens on the Front Lines of Government. As these initiatives move forward, real innovation is happening on the front lines of government.  Dr. Alan Shark, executive director of Public Technology Institute, undertook a series of interviews this past Spring to learn from a handful of champions of cutting-edge innovation just what they were doing and how they were doing it. His interviews and observations are reflected in a new report for the IBM Center.

In talking with José Arrieta, chief information officer at the Department of Health and Human Services, Shark learned that by using agile approaches, Arrieta was able to create the HHS Protect web platform back in April in days, not years. HHS Protect supports the governmentwide COVID-19 Task Force with near real-time information.  This platform includes data from 6,200 hospitals, 3.0 billion data elements, and data from all 50 states plus all six U.S. territories -- including all laboratories, all case information, and all of the diagnostic information that exists in the United States.  Arrieta envisions the next step will be to secure these data via the use of blockchain technology so it can be more widely shared.  Doing this would eliminate the cost burden of constantly replicating data as it moves into different databases.

Shark also learned -- in talking with Nico Papafil, the program manager of a venture capital-like program at the General Services Administration, called 10x --  that there are scores of front line innovators across the government. In 2015, GSA experimented with running a single-day Shark Tank-like competition where federal employees could pitch their technology-related ideas to improve government services. The winning ideas were awarded a small grant to test them out, and the ones that worked were given more time and money to bring them to completion.  This one-time event worked so well that GSA decided to institutionalize this approach to identifying, testing, and scaling new ideas by federal employees in a period of weeks, not months or years.  Twice a year, 10x hosts a competition around a set of themes.  For example, the next competition’s deadline is August 5th and GSA is asking for innovations related to disaster management, direct public service delivery, and diversity, inclusion and accessibility.

In an interview with local government innovators, Shark found that technology could effectively be a bureaucratic silo-buster when using artificial intelligence tools. He talked with Barbie Robinson, director of the Department of Health Services for Sonoma County, California, and her colleague, Carolyn Staats, the county’s director of innovation, about their approach. Their initial effort to integrate service delivery to vulnerable populations was jumpstarted after a disastrous forest fire in the county in 2017. The county formed an interdepartmental multidisciplinary team to work together to provide holistic services to those in need. They were able to move quickly by adapting the lessons and technology from a similar pilot effort in San Diego.  That effort was several years ahead of Sonoma County and it had developed a data management tool that brought disparate decentralized systems together into a central hub. Robinson and Staats were not shy about taking a “lift and shift” approach.  It saved them years of effort! Once the Sonoma team started putting the pieces together, they mastered 91,000 unique clients across the first four systems in just four months.  They used artificial intelligence to manage case notes. So now homeless service workers, social service workers, or health clinicians can see the relevant info about a particular person as never before—and never before in one place.

Five Mindsets That Matter for Innovators.  Shark’s most revealing insight that he took away from his series of interviews was that oftentimes the biggest obstacles to technological innovation in government are not technical computer bugs and glitches, but the less clear-cut challenges of opening hearts, minds and wallets.  Based on his interviews, he Identified five commonalities – mindsets, actually -- which he thinks may be the keys to success for innovators in government.

He learned from those he interviewed that they demonstrated a strong desire to serve their customers, often including other agencies as well as the public. Each of the leaders interviewed are business minded and self-motivated, and took reward from the satisfaction of accomplishing something worthy and for the public good. Shark summarizes the qualities of an entrepreneurial mindset to include:

A collaborative mindset.  Each leader interviewed by Shark noted that their accomplishments represented the work of more than one and often many. These leaders were dynamic and keen on sharing ideas and concepts, and fearless in receiving feedback that might not always be positive. While each was proud of their accomplishments, they did not look to own success. More specifically, he found that a collaborative mindset includes:

An adaptive mindset. Shark observed that each of his interviewees had an adaptive mindset.  This was demonstrated by their desire not to get comfortable always doing the same things in the same way. They viewed themselves as objective thinkers and strategists, with a solid grasp of the current state as well as the ability to contemplate improvements by doing things differently. Other observed qualities of an innovation mindset include:

A leadership mindset.  Each of Shark’s interviewees were in positions of authority, but led by example. They exuded self- assurance and yet they were also exceptionally modest. They all tend to have leadership qualities that inspire, and have a track record that earned the respect of both their senior leadership and the teams who report to them. Other qualities of a leadership mindset that Shark observed include:

In summary, champions of innovation need to convince their leadership of the need for improvement, create a plan to test it and procure funding to get it off the ground. They also need to define success, be ready to change the definition if necessary and create a way to measure progress.  But to do this, “You need the right people in the right place with the right mindset,” says Shark.  He and several of his interviewees – Barbie Robinson from Sonoma County and David Shive from the U.S. General Services Administration – explore this in more depth in an interactive panel session in early July.