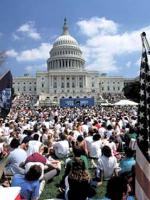 Monday, October 26, 2009
John Kamensky
This past summer the spectacle of unruly congressional town hall meetings on health care reform played across the media. Separately, the Obama Administration has been working on an on-line approach for greater citizen engagement but found some citizen...

This past summer the spectacle of unruly congressional town hall meetings on health care reform played across the media. Separately, the Obama Administration has been working on an on-line approach for greater citizen engagement but found some citizen groups tried to push their own agendas, such as the “legalize marijuana” and the “birthers” demanding President Obama’s “true” birth certificate.

Can citizens engage civilly and constructively? The Congressional Management Foundation released a study today, “On-Line Town Hall Meetings: Exploring Democracy in the 21st Century.” This study reports on a series of pilot on-line town halls that might serve as an additional tool Members of Congress can use to engage their constituents. The purpose of the study was to see what worked and what did not.

The pilots were small, involving one senator (Carl Levin) and a dozen House members. Senator Levin’s town hall involved 200 people; the others involved only a couple dozen participants apiece. The study’s organizers invited participants based on their representativeness of their districts. The town halls focused on the topic of immigration and were held between 2006 and 2007. Oftentimes the Member was in Washington and not in his or her district. To see if it made a difference, non-partisan background materials were shared with some participants but not others.

The results were fairly positive. There was more participation by under-represented groups (young, old, minorities) as well as a high quality in the discussion. While there were relatively few participants, those that did participate talked about their experience with neighbors. They also increased their political participation, for example, by voting in elections where they might not have in the past. Also, 95 percent of the participants said they would likely participate in similar events in the future.

In addition, the town halls increased constituents’ approval of their Members from 46 percent before the sessions to 62 percent afterwards, with an assessment of the “accessibility” of the Members increasing from 48 percent to 80 percent. Members were seen as more knowledgeable and qualified, as well.

While some noted that an on-line town hall does not capture the “mood of the room” or allow for a back-and-forth discussion, more participants felt heard because if their questions were not asked during the session the questions were recorded and followed up on later.