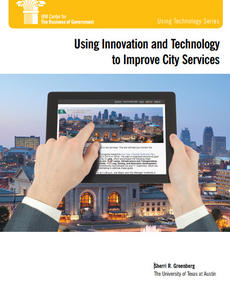 A new report by the University of Texas' Sherri Greenberg for the IBM Center for The Business of Government observes: "Increasingly, cities are the public sector delivery engines in the United States." She says that "City governments, residents, and interest groups are actively seeking methods for better service delivery" and that this often involves the use of technology. But technology by itself won't work. She notes: "Technology is not a shiny new toy; it must be useful and improve people's lives and business dealings, on either a daily or as-needed basis." Greenberg says it is essential to put the right governance structures and policies in place to make new technologies successful. She examines a dozen award-winning cities across the country to see what they did that got them recognized, and lessons learned that others might apply. Greenberg Case Studies Professor Greenberg identifies a series of trends that drive cities to undertake innovations, such as the increased use of mobile by its citizens. But more importantly, she identifies ways cities can take advantage of community resources to help bring innovative ideas to life. Using Inclusive Approaches to Governing. One key trend that was common across the cities she examined was that they tended to use more inclusive governance structures to improve services. For example: San Francisco created an "Entrepreneur-in-Residence" program that combines city and startups to explore ways technology can help make government more participatory and effective. The city held a competition and selected six out of 200 applicants to help develop better citizen engagement approaches and location-based services for citizens. Kansas City sponsors a Mayor's Challenge Cabinet, where young people compete to be on project teams to improve city policies in areas such as open data, citizen engagement, and building a technology roadmap for the city. And the City of Austin created a CityWorks Academy that engages citizens with hands-on experiences with city policies, services, and people through a series of 12 weekly classes. Greenberg observes: "All of these programs bring constituents into city policy development through a formal process. Today, cities are partnering with nonprofits, businesses, and universities on new projects, programs, and funding. Additionally, they are developing new city staff roles, such as chief innovation officers and chief data officers, in an effort to eliminate city department silos." Partnering with a Broad Array of Entities. Many cities seeking to improve service delivery are partnering with a broad array of entities. Many of the case study cities have partnered with foundations and nonprofits, universities and start-up companies. Foundation Partners. Numerous foundations have been heavily involved in fostering innovation in cities. Several of Greenberg's case study cities have partnered with a range of foundations. Some foundations fund city initiatives nationwide, while others are city specific. For example: The Knight Foundation launched its "Knight Cities Challenge" contest to identify innovative ideas to make cities more successful in the areas of talent, engagement and opportunity. Eligible cities are the 26 existing Knight Communities where the Knight brothers own newspapers. The Knight Foundation selected a set of winners from the first round in January 2015. The Kauffman Foundation, a large private foundation in Kansas City, supports entrepreneurial programs nationwide, including an annual Mayors' Conference on Entrepreneurship. Additionally, the Kauffman Foundation funds Kansas City education initiatives, and it has a Kansas City Civic Team that supports and funds innovation efforts to make Kansas City a better place to live and work. The Rockefeller 100 Resilient Cities program selects cities, through an application process, to receive funding for resiliency efforts to combat physical, economic and social challenges. To date 67 cities worldwide have been selected to be Resilient Cities. Non-Profit Partners. In addition to foundations, a number of non-profits work closely with cities to improve services through technology and innovation that engages citizens. For example: Code for America builds open-source software for local governments and organizes people to address complex city challenges through several programs including its Fellowship program that send technology teams to local governments for one year to partner with officials. Another example is Fuse Corps, a non-profit that partners with mayors and civic leaders to place mid-career professionals in cities for a 12-month Executive Fellowship to help with innovation efforts. University Partners. Nationally, many Universities work with cities, and several have been particularly active in partnering with case study cities on innovation and technology projects to improve city services. Examples include: Harvard's Ash Center for Democratic Governance and Innovation Project on Municipal Innovation which identifies and promotes the replication innovative ideas from across the country. Also, Harvard's Ash Center supports the Data-Smart City Solutions initiative, which is a resource center devoted to "the intersection of government and data, ranging from open data and predictive analytics to civic engagement technology." Additional examples of city-university partnerships include: The MIT Lab with the City of Boston, GovLab at NYU with New York City, the University of Chicago with City of Chicago, and the University of Philadelphia with the City of Philadelphia. Business Partners. Numerous start-up companies and established businesses work closely with cities on innovation efforts to improve service delivery. For example: Socrata works with cities to develop their Open Data initiatives. Mindmixer worked with Kansas City to develop KC Momentum to solicit community input on city services. NewBrandAnalytics partnered with Washington, DC to develop Grade DC, which allows residents to evaluate city services. A Key Lesson. How does this partnering and collaboration happen? Attitude matters. Greenberg says: "Implementing new governance and technology in cities requires a culture of creativity and collaboration with external outreach, events, and champions." She says culture is key and that this is framed by top city leaders who provide the inspiration and permission to innovate: "Cities should have internal cultures that stress collaboration rather than silos and promote creativity, innovation, and transparency."