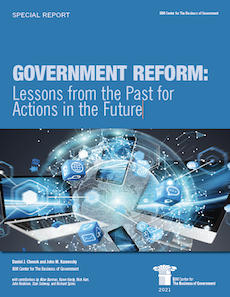 Tuesday, March 23, 2021
Dan Chenok and John Kamensky
What should newcomers to government know about what reforms efforts happened before they arrived?

One of the most striking things new White House staffers encounter when they first walk into their office in the White House -- or the large, gray Eisenhower Executive Office Building next door -- is it’s emptiness.  The previous occupants leave no files or other records – other than records retained by career staff in White House agencies like the Office of Management and Budget, all policy documents went to the National Archives, and the General Services Administration cleaned everything else away before the new staffers arrive.

This can reinforce a natural assumption that new leaders have a clean slate to reform government policies and programs from scratch.  But context and perspective on what came before can have great value:  What worked?  What didn’t?

A new report that we co-authored, along with a set of distinguished contributors, shares insights, lessons – and stories – about our experiences in developing and implementing different kinds of government reforms over the years.

Background. Each presidential administration over the past 30 years has promoted some form of government reform. Some were broad – such as the Clinton administration Reinventing Government initiative in the 1990s and the more recent Trump administration effort to reorganize the federal government. Others were more targeted -- such as the George W. Bush President’s Management Agenda and the Obama Campaign to Cut Waste. Some led to more tangible outcomes than others.

Phase One: Developing a Reform Initiative.  Typically, the development of a reform initiative is time-bound, often the work of a temporary task force to staff the initiative.

Phase Three:  Sustaining the Initiative.  The large scale, highly visible overarching reform efforts such as Reinventing Government, specific initiatives under President’s Management Agendas, and various reorganization initiatives can evaporate at the end of a presidential administration when their political champions disappear. However, initiatives with a statutory basis tend to have greater continuity.  The following success factors have shown to improve sustainability of such initiatives over time:

We hope these success factors serve as useful guideposts for the management team at the Office of Management and Budget, the departmental deputy secretaries and other leaders on the President’s Management Council, as well as other central management agencies and political and career executives across the government, to collectively build government back better.