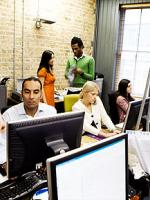 Tuesday, April 26, 2011
Bob Stone, the head of Vice President Gore’s reinventing government initiative, focused his attention on what was going on at the front line. He said helping them understand and get their jobs done was the most important activity of a leader.

That insight led to the creation of both Hammer Awards and Reinvention Labs as ways to both convey reinvention principles and engage people in their day-to-day workplace.

I was reminded about Bob’s insights when I read a recent Harvard Business Reviewarticle, “The Frontline Advantage,” by Fred Hassan, a successful pharmaceutical CEO who led the turnaround of several large, troubled companies.  He said the key to his turnarounds was engaging frontline managers.  He said “The managers most responsible for a company’s success or failure happen to be the one with whom the CEO spends the least amount of time.“ – frontline managers such as shop-floor supervisors and managers in call centers.

He goes on to say: “It is the frontline managers who must motivate and bolster the morale of the people who do the work . . . These managers are central to a company’s business strategy because they oversee its execution.”  I saw this in government in agencies such as Customs, OSHA, Student Aid, and Veterans Benefits.  Connecting with the frontline was where an agency’s success was made or broken.  The government, fortunately, runs a periodic “pulse check” via the governmentwide employee viewpoint survey.  The survey can provide agency leaders a sense of how well aligned their front line managers are with agency priorities and their level of trust in senior leadership.

Ensuring a Sense of Higher Purpose

Hassan really reminds me of Stone when he says: “. . . the CEO who leads through the front has a crucial role to play as champion and chief motivator.”  His or her role is to “unleash personal engagement and emotional energy” by infusing “people’s tasks with a sense of higher purpose.”   Stone exuded “higher purpose” during his leadership of reinvention efforts!

How to Do It

Hassan says he made a commitment to meet with frontline managers, “both formally and informally, on every site visit I made, to communicate my vision and solicit their perspectives and concerns.”  These “CEO Dialogues” were structured so employees would not feel intimidated and would ensure a genuine dialogue:  8-10 participants; recognized by their peers as high performers; a facilitator from the CEO’s immediate staff; held in a room on the front line manager’s turf; a detailed summary and agreed-upon action items going to the executive staff; and comments are kept anonymous. Afterwards, the highlights are shared via the organization’s intranet and the CEO sends a personal email or handwritten note to the participants.

Hassan said he got to know a number of frontline supervisors in his company’s manufacturing plants “I went out of my way to develop personal relationships with them.  I told my administrative assistant to put through their calls no matter what I happened to be doing.  I even gave some of them my personal cell-phone number.”

Hassan told a vignette of how sales managers in one country he visited complained about the company’s bureaucracy in getting access to company cars and how this was preventing them from closing deals.  While seemingly trivial, he addressed the issue and sales increased.  This reminded me of comments made by former General Colin Powell, who said his job was to deal with the trivial barriers so he staff could get the work done.  Many of my most effective bosses saw this as an important part of their jobs

But Don’t Undermine the Middle

Hassan does admit that leading via the front can lead to the perception of undermining middle managers.  In the Gore reinvention effort, the response had been to reduce the size of middle management – it was seen to be twice the size of comparable organizations in the private sector (30 percent vs. 15 percent).  But Hassan used another approach, which sounds a lot like what I’ve heard from General James Cartwright, vice chair of the Joint Chiefs of Staff:

“. . .when it comes to sharing information, leading through the front is an open system.  It is not permissible for anyone to use the chain of command to hold on to – let alone hide – information that ought to be shared.  At the same time, you should never use the information you get from frontline managers to punish their bosses.  The response should always be at the level of company policy, not individual performance.”

Hassan concludes:  “A CEO who leads through the front will incorporate voices from the frontline ranks into management’s decision-making process.  The point is not necessarily to give frontline manger new decision rights.  Rather, it’s to make sure that their point of view is heard by senior managers making the decisions.”

He found his senior leaders did not oppose the empowerment from frontline managers because  “. . .the more that frontline managers themselves could function as engaged leaders, the better their bosses and bosses’ bosses could do their own jobs.”

. . . . So, what’s being done in your organization to empower and embrace front line managers?