Innovation Is a Team Sport 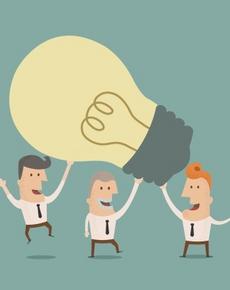 Wednesday, June 18, 2014
John Kamensky
What is the secret sauce for creating an innovation culture in your agency?

Successful inventions often spring from the minds of individual inventors – we often think of Thomas Edison at the classic inventor. But successful innovation is a team sport, according to a new Harvard Business Review article by a team of researchers – Linda Hill, Greg Brandeau, Emily Truelove, and Kent Lineback.

Finding Leaders of Innovation.  The researchers set out in 2005 to study exceptional leaders of innovation.  They found them across the globe and in different industries.  And they found that these leaders had moved away from the conventional view of how leadership works.  These leaders all had come to realize that “leading innovation cannot be about creating and selling a vision to people and then somehow inspiring them to execute it.”  The researchers found that “Direction-setting leadership can work well when the solution to a problem is known and straight-forward.  But if the problem calls for a truly original response, no one can decide in advance what that response should be.”

As a result, for effective innovation leaders: “The question is not ‘How do I make innovation happen?’ but, rather, ‘How do I set the stage for it to happen?’ ” . . . that is: how do I “create a community that is willing and able to innovate?” (emphasis added) The researchers then defined the operational elements of what constitutes “willingness” and “ability” and described how these elements were incorporated into leadership strategies that accelerated innovation in companies as diverse as Google and Volkswagen.

Willingness to Innovate.  The researchers write:  “To build willingness, leaders must create communities that share a sense of purpose, values, and rules of engagement.”  These three elements . . .

Ability to Innovate.  While organizational willingness to innovate is important, three capabilities are needed to allow them to flourish, say the researchers.  These capabilities include:  creative abrasion, creating agility, and creative resolution:

Can It Be Done In Government?  The researchers focused on private sector examples.  Can innovation be embedded in the federal government’s culture, as well?  Sure. There are agencies doing just that.  Look at the traditionally staid Department of Health and Human Services (HHS).  There, former secretary Kathleen Sebelius launched HHS IDEA Lab which “equips and empowers HHS employees and members of the public who have an idea and want to act.” It offers six different “pathways” for employees to create and act on innovations – just as the Harvard researchers envision.

For example, HHS Innovates is an award program created in 2010 to recognize teams of HHS employees who have led innovations such as whole genome sequencing to speed the detection of food-borne illnesses, and the creation of a mobile phone app that can help users determine if their ladders are safe to use.  More than 500 staff-driven innovations have been nominated for recognition via six rounds of competition over the past four years.

My IBM Center colleague, Gadi Ben-Yehuda, recently wrote about another HHS IDEA Lab venue called HHS Ignite – an incubator approach to new ideas. Through this pathway, teams of employees compete for a pool of funding to support innovation projects, with teams given the time, training, and resources to pursue them.  For example, one team – Modernizing FDA’s Ingredient System – will test the software for a substance tracking system developed by scientists at NIH for their research and see if it will meet FDA’s needs to track substances in medical products.

These and other initiatives underway at HHS show that a concerted effort to create an innovation culture can work in government.  And the HHS approaches uses many of the same leadership principles as those demonstrated by exceptional innovation leaders in other industries around the world.  Will they work in your agency?