How Will Government Adapt?: The State of State Finances 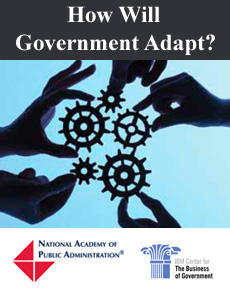 Thursday, January 29, 2015
Guest Blogger
What is the state of State government finances as states grapple with their own short and long-term fiscal challenges and the prospects of the continuing “trickle down” impact of tighter federal budgets given the interdependency of the levels of governmen

This is the sixth blog post in a series that sums up highlights of selected sessions held as part of the annual meeting in mid-November of the National Academy of Pubic Administration. Presenters John R. Bartle, Dean, College of Public Affairs and Community Service, University of Nebraska-Omaha Merl M. Hackbart, Provost Distinguished Service Professor & Interim Director Martin School of Public Policy & Administration, University of Kentucky Marilyn M. Rubin, Professor of Public Administration and Economics and Director of MPA Program, John Jay College of Criminal Justice, City University of New York Katherine G. Willoughby, Professor, Department of Public Management and Policy, Andrew Young School of Policy Studies, Georgia State University Highlights This session examined the fiscal challenges facing State governments, particularly in the aftermath of the economic recession that began in 2008. In addition to current and future fiscal challenges, the session identified major revenue streams, expenditures, and fiscal trends that will effect State governments at present and moving forward. Four Converging Challenges. Panelists identified four converging challenges that will frame State government finance over the next decade. These include: Increasing vulnerability of state and local fiscal systems to economic recessions and a slow-growing national economy; Continued fiscal austerity at the Federal level; Increasing obsolescence of existing state revenue structures; and Continued movement toward “coercive federalism” by the federal government. In light of these challenges, States have begun to implement appropriate financial management processes. States have managed their debt responsibly – approximately 96 percent of debt at the State level is long-term debt – allowing States to better manage their long-term fiscal positions. However, infrastructure costs (i.e., transportation systems), a declining tax base, and decreasing support from the Federal government are trends that will continue to affect the health of State finances. Citing a paper by Drs. Paul Posner and Tim Conlan, George Mason University, “State and local budgets are on an unsustainable course” with long-term structural deficits that will exceed 3 percent of GDP by 2050 (equivalent to $526 billion in today’s dollars). Achieving balance would require cutting costs or raising revenues by about 14 percent per year. Other Points of Interest from the Session: Transportation: Highways are the most important mode of transportation in the US. States provide 50% of the funding for highways – mainly through the motor vehicle fuel tax. From 1960-2010 the US population increased by 20%, while the number of registered vehicles on the road more than tripled during this same time period. Tax Revenue: The growth in e-commerce is a challenging issue and would be a tremendous source of state sales tax revenue – presuming that states were able to collect taxes on e-commerce at some point in the future. The estimated revenue lost from states’ inability to tax goods and services sold via e-commerce increased from $2.7 billion in 2000 to more than $10 billion in 2012. Tax Revenue and Demographic Trends: If taken together, the individual income tax and general sales tax account for two-thirds of state revenues. However, the personal income tax will become increasingly obsolete if states do not reform the tax base to account for demographic trends (i.e., aging population). Pensions: On average, 3-5 percent of state budgets are allocated to pension fund support. Debt: The growth of state government debt is still relatively modest when considering fiscal trends, writ large. A book titled: Sustaining the States: The Fiscal Viability of American State Governments (2014, CRC Press), was referred to by various session participants. Several of the session speakers contributed to the book, either as authors or as editors. (summary by Eric Christiansen, NAPA staff, with excerpts from NAPA Fellow Tim Clark’s article in Government Executive magazine) Visit the landing page of this initiative where you can learn of future blog post topics and follow previous conversations.