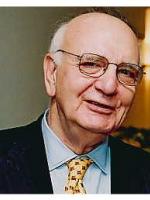 Tuesday, April 13, 2010
John Kamensky
While Jonathan Breul is attending the IRMCO Conference in Cambridge, Maryland, I’m attending the annual conference of the American Society for Public Administration in San Jose, California. I understand it’s sunny in Cambridge. . . it’s rainy in...

Today, Paul Volcker delivered the Elliot Richardson lecture and during the course of his presentation, he said he was personally funding a new public service reform effort that he calls a “Campaign for a High Performance Government.” Now, Mr. Volcker – a former head of the Fed and currently an economic adviser to President Obama – has already chaired two commissions dedicated to improving public service. The first, in 1987, was formally called “The National Commission on Public Service,” but informally called “The Volcker Commission.” It issued its final report in 1989 with recommendations to improve the public service: “Leadership for America: Rebuilding the Public Service.” (if you know of a link to the actual report, please provide it in the comment section!)

The second, in 2001, bore the same name and issued a report in 2003 entitled: “Urgent Business for America: Revitalizing the Federal Government for the 21st Century.” (thanks to Trey for the link).

He has felt neither of the earlier efforts led to sufficient reforms, so this third try will inventory the status of the public service, document the need for action, and identify steps for reform – such as cutting layers of management, streamlining the political appointment process, and slashing the number of political appointees (all of which were recommendations in the earlier reports). He says this effort will also include an extensive outreach campaign to educate the public on the need for action.

Mr. Volcker says this project will be centered at the Wagner Graduate School of Public Service at New York University under the direction of Paul Light and Hannah Sistare. He also said that the NYU team would like to collaborate with other groups that share their urgency on the need to act.