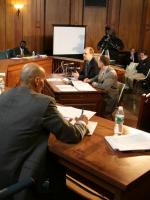 Federal Priority Goal Reviews.  According to the Senate committee report, the new law:

As a part of these reviews, the Director of OMB and the PIC [Performance Improvement Council; see next blog post tomorrow] must categorize the federal government priority goals according to the risk of not meeting performance targets, and for those at greatest risk, identify strategies to improve performance.”

“provides an analogous review process at each agency required to develop priority goals. For each agency priority goal, the head of the agency and the COO, with the support of the agency PIO [performance improvement officer; see next blog post tomorrow], reviews the progress achieved during the most recent quarter and the likelihood of meeting the performance target. The reviews should include the designated leader for each agency priority goal [to be known as a ‘goal leader’], and relevant personnel within and external to the agency.  The reviews should also highlight and strategize regarding high risk areas—in other word, where there is the greatest risk of not meeting a priority goal.”

There are actually pilots of these kinds of reviews already underway.  Governmentwide, there is the TechStat meetings being held by the governmentwide Chief Information Officer, and in some government agencies, most notably in the FDA, which calls its reviews FDA TRACK.  See the IBM Center report on Baltimore’s CitiStat to understand the model.

If you are just joining this series, here's a link back to the first blog post.