Gov 2.0 Requires Us to Update Our Code 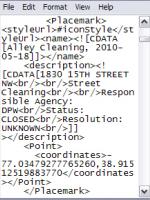 Monday, June 7, 2010
Gadi Ben-Yehuda
Transparency starts at home (or at least in the House): comprehensive, thoughtful regulation is essential to the success of Gov 2.0.
Last week, I talked Gov 2.0 with two Senior Research Fellows at the Mercatus Center, Jerry Brito and Veronique de Rugy.  As advocates of transparency, we were all in agreement that the trend lines over the past two years are good, but that current offerings are woefully short of the mark—and much less than was promised during the last Presidential campaign.  One point of disagreement, though, was my argument that Gov 2.0 encompasses regulation as well as policy and practice.
In my initial post on this topic for the Business of Government blog, I defined Gov 2.0 as “government activities to regulate and utilize the digital landscape.”   In the intervening weeks, a few events make the case for including regulation all the stronger.  Consider this update from a State Department tweeter writing from the Personal Democracy Forum:
“We are making strides in changing the culture of the Dept of State but it takes time!”
Also, note this interview with, of all people, Jerry Brito. The key passage is when Jerry is talking about how legislators release their earmark information.  He says:

Both houses of congress have recently passed rules that require members of congress to disclose what earmarks they are requesting.  Unfortunately, these rules don’t specify how they are to disclose that.  So you might find that one congressman puts it as a scanned PDF in their press release section; another puts it in the about section of his Web site.  So there’s no systematic way to search for these or analyze them.

Getting the right laws in place to achieve the goals of Gov 2.0—in this case, transparency—is going to be a case of building the bicycle while we ride it.  To Lovisatalk's point, it takes not only time, but the application of fire to fanny, and no one's put on the Hot Seat without congress setting the regulatory table.
Sen. Tester’s and Rep. Israel’s Public Online Information Act is a good example of congress trying to codify what information should be made pulic and that "made public" means "put online."  But it still doesn’t address the important question of how government will format information for release, an essential component of any comprehensive legislation.  What are the components that comprehensive legislation will include?
Thankfully, the heavy lifting has already been done.  Daniel Schuman, blogging for the Sunlight Foundation, shares a link to 9 Open Data Principles .  Briefly, the nine principles are:
If we are to achieve transparency (or any other avowed goal of Gov 2.0), and to see it progress as technologies change, we must update our legal code as surely as we update our computer code.  As with so much necessary change, the move to transparency begins at home--or at least in the House.