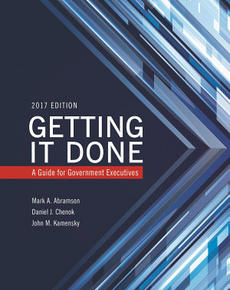 Tuesday, November 15, 2016
Dan Chenok
This book aims to help new government executives acclimate quickly to the world of public service as practiced in Washington, D.C., and it contains a series of short strategic discussions about “dos and don’ts,” along with insights about working with key

In 2009, the IBM Center for The Business of Government released Getting It Done: A Guide for Government Executives as a guide for new leaders, especially new political appointees. This book helped new government executives acclimate quickly to the world of public service as practiced in Washington, D.C., and it contained a series of short strategic discussions about “dos and don’ts,” along with insights about working with key stakeholders from experienced political executives. Getting It Done was revised and reissued as a second edition in 2013. Over the last eight years, Getting It Done has been widely read, ordered, and reordered as a must-read roadmap for government leaders to hit the ground running.

With the advent of a new administration in 2017, a new set of leaders will arrive across the federal government. The government that they will lead has changed in many ways from the government inherited by the Obama Administration in 2009. Accordingly, this 2017 edition of Getting It Done has been updated to reflect the changes. Part I introduces current perspectives on what to do (and what to avoid) to succeed; Part II contains a series of new essays on key stakeholders by experienced government professionals who have “been there” and “gotten it done.”

The goal of this book is to assist political executives, as well as career executives new to their position, in navigating the current political environment and the world of Washington. The waters are likely to be turbulent. If one does successfully succeed in managing in Washington, it will be a very rewarding and fulfilling experience.

Part I contains seven “to-dos” necessary to “get it done” in Washington. Part II consists of 14 chapters, each describing an important stakeholder in the political environment of Washington.

Part I presents a straightforward to-do list to guide you in your new leadership position:

Part II of this book provides overviews of the 14 stakeholder groups you will most frequently encounter while in government. We grouped these stakeholders into four clusters: your bosses, your colleagues, your constituencies, and your overseers. While some groups might appear in two categories (Congress is your boss and oversees your organization), this framework is useful to understanding your relationship with each one.

It is often said that one of the major differences between the public and private sectors is that you have many bosses in government. While the assertion that you have 535 bosses in Congress might be slightly overstated, there is much truth to it. In Washington, any one of the 535 members of Congress (or any of their 30,000 staff) can make your life easier by supporting your agency—or more difficult by providing your agency with a directive or a new piece of legislation placing restrictions or limitations on what your agency can do.

Closer to home, however, are three distinct parts of the White House on which your job literally depends. First, there is the White House itself. While you will see the president infrequently, you will often encounter a variety of special assistants to the president, each of whom works in a different White House office. They can be enormously helpful and supportive to you once you develop a good working relationship with them.

Last, but by no means least, is the Office of Management and Budget (OMB), which coordinates the development of administration policies and decides on how much funding your agency can request from Congress. In addition, OMB will be involved in many other aspects of your position, such as reviewing proposed legislation or your testimony before Congress, as well as overseeing regulations you might propose. As in all organizations, working with your bosses is essential to your success in government.

While it has an oversight function, we have placed the Office of Personnel Management (OPM) in the colleague grouping. We recommend that you reach out to OPM to help you and your agency seek human capital flexibilities that can assist you in better accomplishing your agency’s mission. While OPM provides specific services to your agency, you can also work with them as colleagues to achieve your mission.

Your constituencies
Each agency will have its own unique set of constituencies. In Part I (Seven “To-Dos”) we note that different constituency groups cluster around your agency. We have not attempted to map the specific groups that will have an interest in your particular agency. Your staff will be able to describe these groups to you, and you will soon be meeting with them to get acquainted and to begin building effective partnership relationships.

Instead, we have focused on a cross-cutting set of constituencies. There are the citizens, with whom you will interact in two ways. First, some citizens will be your customers, and we recommend in Part I that you meet with customers to assess their satisfaction with your agency and whether the delivery of services to them can be improved. Second, citizens are in fact the ultimate bosses of government and indeed have major stakes in the government policies and programs. In our Part II chapter on citizens, we recommend that you use social media and other new tools to engage citizens on new policies or programs you are considering.

Turning to the internal side of your organization, we discuss the importance of unions as a constituency. If your agency is represented by one or more unions, develop a collaborative working relationship with them.

While government executives are becoming increasingly attuned to the importance of collaborating with other federal agencies, the next major challenge is for the federal government to develop more effective working relationships with state, local, and tribal governments. Federal spending will become much tighter in future years. As a consequence, government leaders will need to find new ways to accomplish national objectives through partnerships with states, localities, and nonprofit organizations.

Finally, there are the traditional interest groups and associations. As noted above, you will quickly get to know the organizations interested in your agency. In the chapter on interest groups and associations, we stress the importance of these groups as a valuable information resource for you. There will clearly be differences of opinions between you and these groups. The key to a successful relationship will not be agreement on all issues, but instead your ability to create an ongoing dialogue with them and to maintain a constant exchange of information between you and the organizations.

Your overseers
In addition to looking upward to your bosses and sideways at your colleagues and constituencies, you will also need to look over your shoulder at your overseers. Oversight organizations are a fact of life in government. Ongoing scrutiny of how public funds are spent will become a daily part of your life. While it is all too easy to fall into an adversarial relationship with your overseers, you should work hard to develop an effective working relationship with them.

The most well-known oversight, or watchdog, organization is the Government Accountability Office (GAO), previously known as the General Accounting Office. In the chapter on GAO, we place the emphasis on your using GAO as a valuable information resource. While your staff, including your GAO liaison, will be busy working with GAO on specific GAO reviews underway in your agency, you can use information contained in prior and ongoing GAO studies to identify problem areas that Congress is likely to ask you about and areas that your agency will need to work on.

The second watchdog organization you will encounter is the independent Office of the Inspector General in your department or agency. Past relationships between IGs and agency heads have ranged from outright hostility to a cooperative partnership. Like GAO, IGs can identify problem areas that your agency needs to focus on.

Third, you will encounter the media. The Washington media are unique. You will have an able press staff to assist you in both your proactive and reactive relationships with the media. Like all the stakeholders discussed in Part II, the media can assist you greatly in getting your message out and communicating your vision to those both inside and outside of government. As with all the stakeholders discussed, time spent with the media will be a good investment.

We would like to thank two individuals who were instrumental in the previous editions of Getting It Done: G. Martin Wagner and Jonathan D. Breul. While serving as a Senior Fellow at the IBM Center, Marty Wagner drafted the initial Part I insights on “to dos” based on his 30-year government career. Many of his insights continue to be timeless. Jonathan Breul, former Executive Director of the IBM Center, was a key participant in both previous editions, and among many contributions was responsible for developing the stakeholder map contained in the book.

New government leaders have a great opportunity to make a positive difference for the nation. We hope that the 2017 edition to Getting It Done will prove useful in helping them to achieve success.