The Future Has Begun! Using Artificial Intelligence to Transform Government 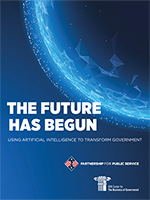 Tuesday, January 9, 2018
Dan Chenok
Claude Yusti
A new report from the IBM Center and the Partnership for Public Service outlines the promise of AI to help government improve mission and program performance.

Government agencies are being challenged to provide more and better services. At the same time, agencies face budget and resource constraints. Some organizations are looking at how to reinvent their programs for serving citizens. This environment places a premium on investigating and testing new approaches -- one of the most intriguing such approach involves the use of artificial intelligence, or AI.

Artificial intelligence has become increasingly prominent in daily life – from buying things online through talking to a device using Siri or Alexa, to portrayals in movies and entertainment. AI can appear as something controversial or transformational. Often, however, there is no clear explanation of AI and what it can and cannot do, especially with regard to its role in helping government.

To help address this topic, the IBM Center for the Business of Government and the Partnership for Public Service today released a study looking specifically at the role of AI in government. Often, the direct application of AI in government has been overlooked, with a focus instead on commercial applications where government creates an environment to attract and educate the talent who can foster the growth of AI. However, AI can mean much more for government operations, efficiency, and effectiveness.

Our new report -- The Future has Begun - Using Artificial Intelligence to Transform Government -- examines four case studies where Federal, State and local agencies have used AI. The study also distills the findings from over a dozen interviews with thought leaders applying AI in government, addressing questions that include: what have they learned, how can government leaders be thinking about benefiting from using artificial intelligence, and how do you get started?

Among the lessons learned by government experts is to start small and learn, letting pilots evolve into applications. AI requires intensive use of data, and proper planning needs to be made upfront for leveraging data properly. In addition, agencies are increasingly partnering with Universities and other organizations to acquire AI expertise.

Today’s report demonstrates that government can use AI to solve real issues in delivering on their mission, and that agencies want to understand where and how AI is useful. The study provides a foundation to help make that decision.