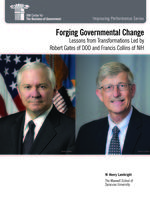 Sunday, October 7, 2012
Michael J. Keegan
How do leaders of very diverse agencies direct ambitious change? How do they achieve significant goals? What strategies do they use to overcome opposition and win allies?How do specific organizational and political contexts affect strategies and outcomes?

These are important and age-old questions. To help answer them, we have just released a new report Forging Governmental Change: Lessons from Transformations Led by Robert Gates of DOD and Francis Collins of NIH, by Professor Harry Lambright of the Maxwell School at Syracuse University, which examines the roles played by Robert Gates as secretary of defense from 2006–2011 and by Francis Collins, director of the National Institutes of Health (NIH) since 2009. With Gates and Collins, Professor Lambright has identified two outstanding government leaders who both led transformation initiatives in their organizations. By all accounts, both men have been effective leaders of change.

This report continues the IBM Center’s long interest in leader­ship and transformation. In the case of Robert Gates, the report focuses on his efforts to transform weapons procurement at DOD. Upon returning to government in 2006 as secretary of defense, Gates concluded that he had an opportunity to rein in the cost of defense weapons procurements and halt the produc­tion of unneeded weapons.

In the case of Francis Collins, the report focuses on his efforts to transform NIH by creating a new institute, the National Center for Advancing Translational Sciences, which Collins believes will serve as a catalyst to change the culture of NIH. Collins sought to enhance NIH’s capability to translate its knowledge in addressing what the public needs from drugs and treatment. I recently had the pleasure of interviewing Dr. Collins for an hour on The Business of Government Hour.  I invite you to listen to our conversation as it is a very nice complement to the insights found in Professor Lambright’s report.

In his report, Professor Lambright outlines many similar challenges faced by Gates and Collins, as well as their effective responses to these challenges. Lambright concludes that experience and leadership skills really do matter, and that both leaders set clear goals and offered clarity as to means. The report also describes how both overcame opposition to their transformation initiatives.

As noted above, this report builds upon prior research by the IBM Center for The Business of Government on the crucial topics of leadership and transformation. In 2011, the IBM Center published A Leader’s Guide to Transformation: Developing a Playbook for Successful Change Initiatives by Robert A.F.Reisner.

Coupled with the recent Reisner report on transformation, we trust that this new report will provide insights to all government leaders seeking to transform their organizations through new initiatives and reform.