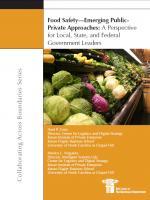 Food Safety Net is Fraying
Most Americans purchase food for their family’s dinner table with a high level of assurance that the food is safe. However, recent incidents of contamination have brought into sharp focus existing gaps in our current food safety net and drawn attention to needed changes.From contaminated peanut butter to spinach, the U.S. food safety net has shown signs of fraying with tainted products slipping through to retail shelves causing human harm and economic ruin.  According to the CDC, everyday about 200,000 Americans are sickened by contaminated food.The total cost of food contamination in the U.S. was recently estimated to be $152 billion, including health and human welfare costs as well as economic damage to companies and entire industries. At the same time, the food and agriculture  industry represents more than $1 trillion in economic activity—or approximately 13 percent of the gross domestic product.

Food Safety System is Fragmented
“Fragmented” is the word most often used to describe the U.S. food safety s

ystem. Today, more than 15 different U.S. agencies collectively administer more than 30 laws related to food safety. For example, different agencies regulate meat lasa­gna and vegetable lasagna, because meat products are the esponsibility of the USDA while vegetable products are the responsibility of FDA. This complexity of the regulatory landscape for food safety has prompted calls for consolidation, or rationalization, of all food safety responsibilities at the federal level in a single agency. One of the first efforts to consolidate food safety oversight in the U.S. was the reintroduction of the Safe Food Act in 2005 February 9, 2009,
Secretary of Agriculture Tom Vilsack advocated the consolidation of all food safety responsibilities into a single agency. Proponents argue that the single-agency solution would reduce the duplication of responsibilities, service gaps, inconsistencies, and confusion about which agency oversees what type of food.

The new approach to public-private partnerships includes the following:

This report describes the current responsibilities of key federal agencies now responsible for food safety in America, including the Food and Drug Administration, the Food Safety and Inspection Service, and the Centers for Disease Control. It also describes legislation now pending before Congress, which would modify the current responsibilities for agencies now involved in food safety.