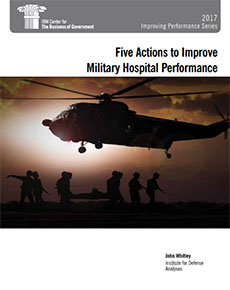 Thursday, September 14, 2017
Michael J. Keegan
The DoD’s direct care health system plays central role in both the readiness and beneficiary missions of DoD, which means ensuring its effectiveness and efficiency is vital to the success of the U.S. military.

The Military Health System (MHS) is a global, comprehensive, integrated system that includes combat medical services, health readiness, and a health care delivery system amongst many other functions. As one of the largest health care systems in the U.S, with total spending of more than $50 billion per year, the MHS includes both a direct care component, composed of DoD-operated and staffed military treatment facilities (MTFs), and a purchased care component operated through TRICARE regional contracts. Its fundamental mission providing medical support to military operations, is distinctly unique from any other health system in the country.

The rising costs of healthcare in DoD and the high cost of the direct care system have placed a spotlight on the management of its Military Treatment Facilities (MTFs). This, combined with concerns about adequacy in supporting the readiness mission and quality led Congress to direct a major overhaul of the direct care system in the National Defense Authorization Act (NDAA) for Fiscal Year (FY) 2017 signed into law December 23, 2016.

The direct care system’s central role in both the readiness and beneficiary missions means that ensuring its effectiveness and efficiency is vital for mission accomplishment. It provides an “operating base” for the military medical community and provides flexibility for rapidly transitioning and deploying personnel. The direct care system faces growing challenges that hinder its effectiveness in delivering on its mission—its utility to readiness and its high cost.  Dr. John Whitley’s, just released IBM Center report, "Five Actions to Improve Military Hospital Performance" explores these challenges and offers five actions DoD leadership can take to improve the performance of its hospitals.

This report is as timely as it is as direct in its prescription for improving the performance of MTFs. Whitley presents background information on the challenges of the direct system to provide context for the modernization reforms directed by the NDAA. He describes specific actions DoD can take to improve performance and reduce costs in MTFs:

Many of the recommended actions have been implemented on limited scales (or in other mission areas). Dr. Whitley’s research draws lessons learned from this modernization discussion that can be applied across government operated healthcare delivery systems.

None of these reforms are surprising or new. All have been debated in Congress and most are explicitly directed and authorized in legislation. DoD has long been a leader in the use of revolving funds and data driven management, and has experience with public-private partnerships in healthcare delivery. Modernizing the direct care system is good for national security, military service members and the taxpayer—and can even be done in a way to improve civilian trauma care across the country.