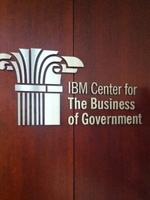 Thursday, January 3, 2013
John Kamensky
The IBM Center’s newly-released “Next Four Years” Resource Center updates its 2009 Presidential Transition materials for new political appointees. But it offers more in the way of other good government imperatives that will challenge leaders tomorrow.

Topic 1:  Helping New Leaders Succeed.  The IBM Center has updated its two most popular books for new leaders in government:

Topic 3:  Managing Cross-Agency Collaboration.  Technology has significantly reduced the technical and organizational barriers to cross-agency collaboration.  In fact, the Obama Administration has undertaken a number of cross-agency initiatives that leverage these tools. While there continue to be legal, institutional, and budgetary challenges, there are lessons that can be learned from past efforts. A recent Government Accountability Office report details the success factors around a dozen effective ways to organize and implement collaborative efforts.  (here is a link to a longer PDF article on this topic).

Topic 4:  Harnessing Citizen Input to Manage More Effectively.  Social media will likely play a bigger role in citizens’ participation in government in coming years.  We envision it will be more widespread, more actionable, and government will be more open. For example, the website GovSM.com lists the social media links of more than 200 federal agencies and offices.  Americans should see not only an increase in conversations but in actionable information and implementable innovation in coming years, like –e-petitions, regulations.gov and challenge.gov.  (here is a link to a longer PDF article on this topic).

Topic 5:  Refining Intelligence Community Reforms.  The past decade has seen significant rethinking of how our country organizes its intelligence and counter-terrorism efforts. The effort is still a work in progress, but the emphasis is now on refining how the five “intelligence disciplines” (signals, human, open source, geospatial, and measurement & signatures) work together as integrated intelligence strategies. Tinkering with organizational and budgetary authorities won’t be the answer; collaboration, greater sharing, and better analytics will likely be the key drivers to reforms over the next few years. (here is a link to a longer PDF article on this topic).

Topic 6:  Creating a “Faster Government.”  When government agencies are able to do their work faster, it improves mission effectiveness and costs less – in money, time, and effort.  By faster, we mean:

An IBM Center report is forthcoming with a series of essays on real-world examples of ways to act on these “fast gov” principles.

NOTE:  This is the last in a series of blog posts on Federal Government Reform Resources.  Here are links to the earlier posts: